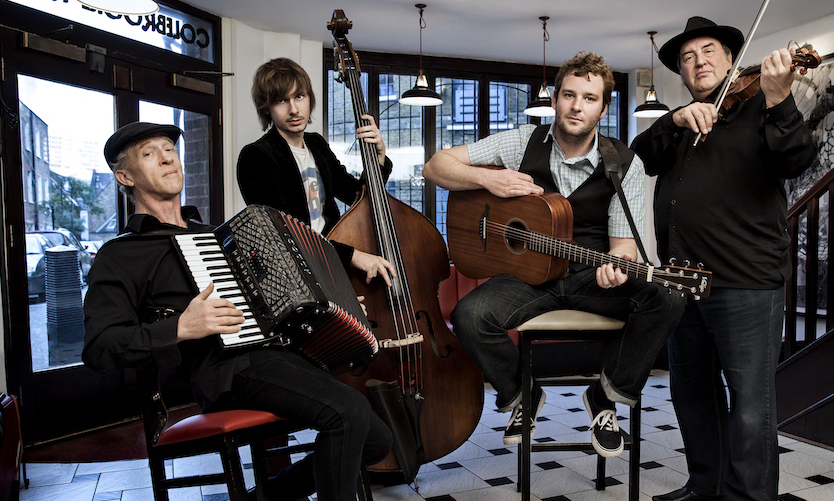 The 9th Ward Ramblers are a superb acoustic act, based in London, but with a soul from downtown New Orleans.

...From bluesy ballads to zydeco wigouts, 9th Ward Ramblers create music that's as refreshing as it is riveting...

...The music was fabulous and boy, did we all have a good dance...

...The foot tappin', finger snapping blues of 9th Ward Ramblers held nothing back...

...Your music got everyone up dancing and enjoying themselves!...

A band born in London, but with a soul from downtown New Orleans. The 9th Ward Ramblers perform wonderful acoustic arrangements of honky tonk, folk, rockabilly, 1950s R&B, early jazz and Cajun music. It’s a fresh and different sound – guaranteed to get people on their feet.

The band have gigged all around the UK, from the smallest bars and speak-easies to large festivals, galleries, private events and corporate functions. Comprised of some of the UK’s top session players, band members have featured for artists such as Van Morrison, Loudon Wainright, Bob Geldof, Jeff Beck, Richard Thompson and Nick Lowe.

Taking inspiration from the music of Louisiana, the band take an old sound – detailed harmonies, accordion, fiddle, double bass and guitar – and make it new. Dressing the part, with their old-timey tunes, they add a special and unique edge to any festival or event.

The 9th Ward Ramblers can provide different line-ups, from a duo to a four piece band. They are able to perform amplified, or completely acoustically.

“Thank you so much for playing at our wedding reception. We really enjoyed the evening and all of our guests all said how great your music was. Your music got everyone up dancing and enjoying themselves! It was absolutely perfect and was exactly what we were looking for.” Abi Nash (previous client – wedding, Hampshire)

“We couldn’t have chosen a better band for our wedding day. The guys were punctual, extremely polite and very friendly. They’re also brilliant musicians. The music was fabulous and boy, did we all have a good dance. Thank you so much guys, you really helped make our day such a very special one. Several of our guests said ours was the best wedding they’d been to (it was an emotional day!) and you played your part in that.” Toby Smedley (previous client – wedding, Sussex)

“Thank you so incredibly much for playing at our wedding last Sunday. You guys made it so special for us. You were a huge talking point and a hit with everyone and your music is just fantastic.” Nicholas Hallett (previous client – wedding, London)

“Thanks for an amazing party. So far I have had at least 6 neighbours comment (one of the about half a mile away!) on how great the music was! it was perfect, many thanks.” Ben Molyneux (previous client – private party, London)

“We just wanted to say thank you to you and to the rest of the band for the most fantastic two sets at our wedding. Friends and family are still asking us about you all and saying it’s the best band they’ve heard at a wedding. We were delighted with all the songs that you chose and especially grateful to you for playing ‘Tonight I’ll be Staying Here with You’. The accordion sounded great in that song! You judged the mood of the evening perfectly and the music moved along beautifully in response to this. I think it was a real highlight of the day for us and all of our guests, especially the children who loved seeing you all playing your instruments.” Heather Saunders (previous client – wedding, Oxfordshire)

“We just wanted to say a big thank you for playing at our wedding in July.  The music was fantastic and everyone said how much they enjoyed it, it fit perfectly in the garden and it was great how smoothly it all ran.” James Rutter (previous client – wedding, Cornwall)

“You and the band were great and loads of our guests said how much they enjoyed your set. Its just a shame that it was so warm that a few more of them couldn’t have danced along.” Chris Pierce (previous client – wedding, Hampshire)

“This is a really late thank you, but we absolutely loved you guys and were so chuffed with your set.  So many of our friends and family commented on how much they enjoyed your band, and it really brought the whole atmosphere of the day together.  We were dancing on the beach as your tunes drifted down the coast.  We were thrilled when you played an extra round of songs.” Elizabeth Pennington (previous client – wedding, Devon)

“Thanks so much for Saturday! The band was great, and was a big hit with everyone! Thanks for coming down and for being professional and easy to work with, after 2 weddings we really appreciate people that do what they say they will!” Heather Buchan (previous client – wedding, Ditchling)

“Thanks for playing at our wedding! I’d recommend you to anyone who wants live music at their wedding or party.” Christine Evans (previous client – wedding, London)

“Thank you so much for playing during our wedding ceremony! Many of my friends and family mentioned to me how beautiful your singing was, so I’m sure you’ll have many more bookings coming your way!” Jyrki Kolsi (previous client – wedding, Lake District)

“Your singing and playing was absolutely wonderful, and created exactly the right mood during our wedding breakfast. I was very impressed by your professionalism – you dressed the part, set up quickly and efficiently, and made sure that the whole day was stress free.” Angela Devichand (previous client – wedding, Gwent)

“Just wanted to say thanks for playing at our event last week. Brilliant playing – the highlight of the evening!” Arnon Yahav (events manager – private party, London)

“The foot tappin’, finger snapping blues of 9th Ward Ramblers held nothing back… Dancing on the same floor as the stage, the contagious energy in the room is fueled by the performers. With this group in the old theater pub it truly felt like a different time.” Dave Cole (LonderGroundJazz blog)

“From bluesy ballads to zydeco wigouts, 9th Ward Ramblers create music that’s as refreshing as it is riveting.” Rick Pearson (journalist for the Evening Standard)

A Ghost Of A Chance by Victor Young

All My Trials by Trad

All Of Me by Ruth Etting

Baby Let Me Follow You Down by Bob Dylan

Blackbird by The Beatles

Blue Moon of Kentucky by Elvis

Don’t Get Around Much Anymore by Duke Ellington

Fly Me To The Moon by Frank Sinatra

Georgia On My Mind by Ray Charles

Ghost Of A Chance by Victor Young

Golden Slumbers by The Beatles

How High The Moon by Morgan Lewis

I Ain’t Got No Home by Woodie Guthrie

I Got A Woman by Ray Charles

I Saw Her Standing There by The Beatles

I Would Rather Go Blind   by Chicken Shack

I’m Going Down To The River by Ray Charles

If I Had a Hammer by Pete Seeger

Joshua Fit The Battle Of Jericho by Trad

Mardi Gras Mambo by The Hawkettes

On The Sunny Side Of The Street by Louis Armstrong

Settin’ The Woods On Fire by Hank Williams

She’s Got Me Hook Line & Sinker by Smiley Lewis

Song For My Father by Horace Silver

Such A Night by Dr John

That’s All Right Mama by Elvis

The Chicken And The Hawk by Big Joe Turner

The Fat Man by Fats Domino

The Night They Drove Old Dixy Down by The Band

The Water Is Wide by Carter Family

The Weight by The Band

Tonight I’ll Be Staying Here With You by Bob Dylan

Unchain My Heart by Ray Charles

Up Above My Head by Sister Rosetta Tharpe

Walk Right In by Gus Cannon

Way Down In The Hole by Tom Waits

When The Saints Go Marchin’ In by Trad

When The World’s On Fire by Carter Family

Ya Ya by Lee Dorsey