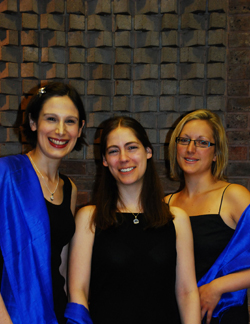 Azure is a flute, oboe and piano trio who have appeared at many high profile venues, including Tate Britain art gallery and the Guildhall in the City of London. They are experienced in providing music for weddings, dinners, corporate events and private parties.

Azure is a flute, oboe and piano trio who have appeared at many high profile venues, including Tate Britain art gallery and the Guildhall in the City of London. They are experienced in providing music for weddings, dinners, corporate events and private parties.

This exciting trio of experienced musicians have played in a wide variety of settings, and are equally at home on the concert platform, in corporate functions or the recording studio.

Lucy McIntyre – flute & piccolo
Lucy has given solo recitals at venues including the Purcell Room, Huddersfield Contemporary Music Festival, Fairfield Halls, St. Martin-in-the- Fields and St. James’, Piccadilly. She graduated with First Class Honours from Trinity College of Music in 2006 and has since continued her studies privately with Sharon Williams, Nancy Ruffer, Michael Cox and the late Sebastian Bell. She is an Extra player with the BBC Scottish Symphony Orchestra.

Julia White – oboe & cor anglais
From 2007-9, Julia played with Santiago Philharmonic Orchestra, Chile on cor anglais and oboe, first as a guest soloist, and then as a permanent member of the orchestra. She studied at Trinity College of Music where she gained an Advanced Postgraduate Diploma with distinction, and was a Junior Fellow. Julia also has an MA in music from Birmingham Conservatoire.

Ruth Young – piano, composer & arranger
Ruth plays regularly throughout London and the South East at venues including the Barbican Centre, Kensington Palace and Riverside Studios. She has also performed as a concerto soloist at the University of Essex. Ruth studied performance and composition at Colchester Institute, achieving a first class BA Hons in 2003. She then continued her study of composition as a postgraduate at Trinity College of Music.

Their large repertoire features music in a variety of styles. Usually they perform as a trio of flute, oboe and piano, but many options are available, including:

* Solo flute, oboe or piano
* Duo of flute/piano or oboe/piano
* Addition of other instruments, for example other woodwind, harp, guitar and/or strings

For venues without a piano, a portable keyboard is available.

They also offer a selection of concert programmes and are delighted to collaborate with venues to prepare specific repertoires:

Concert 4 – Music for dancing – from a classical Mozartean minuet to a twentieth century Rumba!

Concerts can be given both with or without spoken introductions to the music, as required. Lecture recitals with more detailed information and analysis are also available.