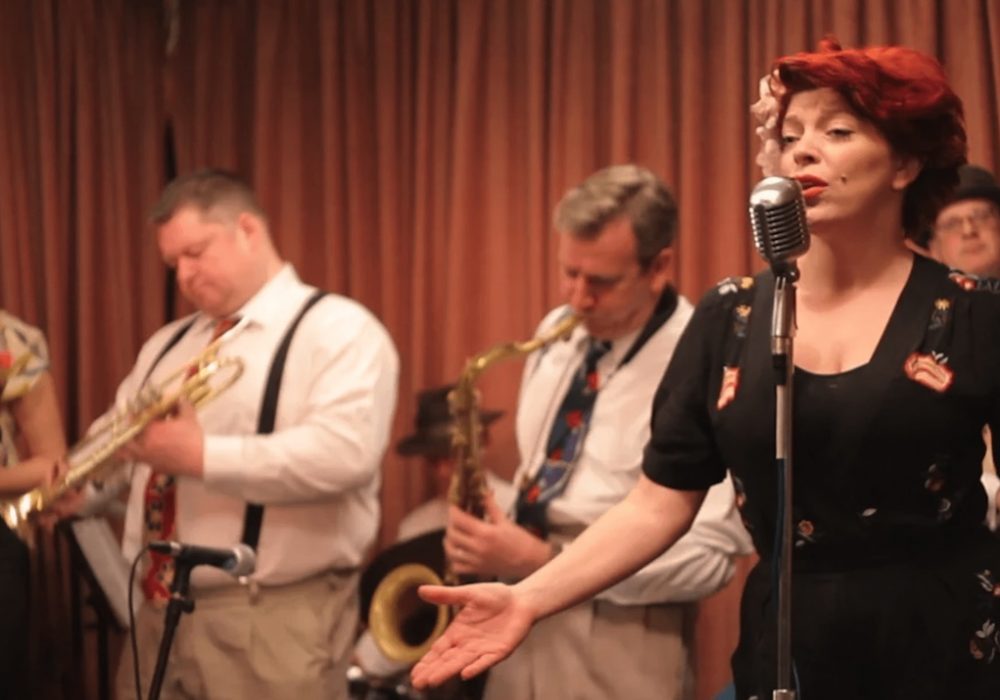 Swing band for hire.
Blue Harlem is a 5 to 11 piece swing band playing the classic songs of Gershwin, Porter and Berlin, as well as original material, comprising female vocals with a 4 piece brass section.

The group I'm currently raving about - it's happy music that makes you want to dance!

Blue Harlem ... are one of the best party bands around

Blue Harlem is a 5 to 11 piece swing band playing the classic songs of Gershwin, Porter and Berlin, as well as original material, comprising female vocals with a 4 piece brass section.

Blue Harlem hit the bandstand running. Formed by Al Nicholls in early ’96 (he served his time with Big Town Playboys, King Pleasure and Ray Gelato’s Giants), the members kept meeting in other groups so it seemed natural to get together – for good.

Their love of the music of the golden swing era, and the classic songs of Gershwin, Porter, King et al means that stylistically they are all hip to the same muse. With the likes of Nat ‘King’ Cole, Ella Fitzgerald, Louis Jordan and Count Basie as their heroes, you can be sure the band will get you jumping. Their extensive repertoire ranges from the big-band sounds of Glen Miller to the rock ‘n’ roll of Ruth Brown and Etta James.

The band are now regulars at the world-famous 100 Club, as well as playing many other London venues including the Barbican Centre, the South Bank Centre and Jitterbugs. They have an enviable reputation as a party band, having played for society weddings at venues across the UK from The Grand Hotel, Brighton to Melkleour Castle. They have been invited on three occasions to perform at Highgrove House charity balls for the ‘Prince’s Trust’.

In a world over-populated with low-energy soundalikes, this is a group of Olympian musicians with enough wattage to light up Broadway on a busy night. It’s not for nothing that they say ‘Follow your feet!’.

‘Solid swing and great arrangements from this stylish up-town band – they kept the dance floor packed and we will definitely want them back.’ Simon Selman, London Swing Dance Society

‘Al Nicholls has an approach that’s solidly based on the great Texas tenors, and he has gathered round him like-minded musicians who make the sound he wants. His band’s fire, attack and precision are reminiscent of early Basie.’ Dick Laurie, Hot News International

‘..are guaranteed to get your adrenaline flowing with their brand of high energy big band swing and R&B that would have been equally at home at the Apollo or the Savoy in the 40s as it is today.’ Tony Watson, Blues and Rhythm