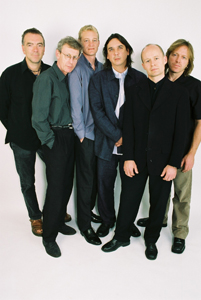 At the end of the last century, musical adventurers Daily Planet disbanded and the editorial team went their separate ways to pursue other projects and ambitions.

Banjomeister Leon Hunt completed his three-year music and music technology degree and also spent most of 2002 playing for The Royal Shakespeare Company in both London’s Roundhouse and The Royal Shakespeare Theatre in Stratford-on-Avon. Tim Robinson also decided to return to his studies and gained even more drumming credentials at The Guild Hall, London. Tim has also been very busy playing with Afro-Celt fusionists Baka Beyond. Harmonicist Jamie Matthews chose to let his musical career take a back seat for a while and put his efforts into co managing one of the West Country’s most popular music venues, while keeping his hand in with various acts based in the Bristol/Bath area. Those who remember the first incarnation of the Planet in the mid-nineties will welcome the return of the band’s original bass player/ guitarist Dominic Harrison from the longest Planetary sabbatical of them all – six years! – though he’s not been resting on his laurels either, appearing with countless other bands, and as a sideman for touring Americans in the UK such as David Grier and Matt Flinner.

Alongside these Planet veterans are the new boys, Andy Christie (piano/keyboards) and Henry Sears (fiddle, mandolin and low whistle). Leon and Tim first met Andy whilst they were all hired as session players for two shows in London (the first a TV show alongside The Spice Girls and Robbie Williams, and the second at Wembley Arena!) Anyone familiar with Daily Planet’s unique musical compass will appreciate that an accomplished jazz pianist with a strong understanding of country and roots music could be considered ‘tailormade’ for the band’s purposes and key to what is this latest step in the band’s evolution. The Planeteers have been long-time fans of multi-stylist fiddle virtuoso Henry Sears playing, back as far as his early days with the acclaimed Afterhours. When invited to be a part of this new line-up Sears admitted to being a long time fan of Daily Planet and accepted immediately.

So here we are at the beginning of new chapter of what has often been described and one of the most exciting and unique bands around.

‘… If you don’t know the Planet, you soon will. A Daily Planet gig is like taking a ride on a roller coaster- it starts off easily enough… it’s good classy material, but just when you think you’ve reached the watershed of Planet styles they hit you with a quantum leap and you realise that you’re on a kind of musical white knuckle ride… ‘ FOLK ROOTS