Dante Ferrara, superbly costumed minstrel specialising in music and songs of Renaissance Europe. Great for Medieval themes, Venetian masquerades and so much more. 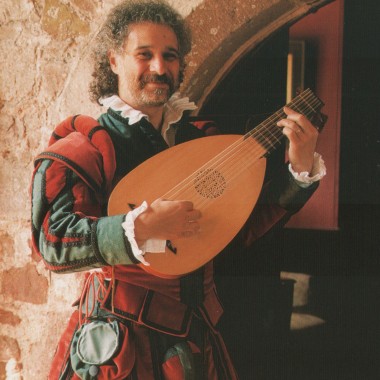 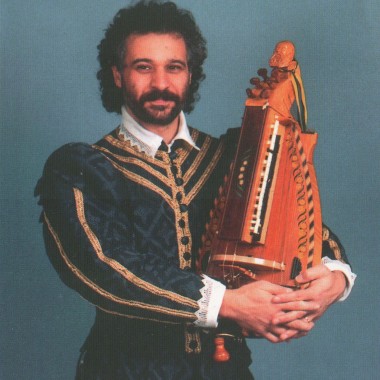 ...He is unique; and a charismatic and talented musician...

Dante Ferrara is passionate about performing and passionate about giving his listeners a memorable experience. Whether his music is for an intimate dinner party, a wedding or a large-scale event his enthusiasm for entertainment cannot be surpassed.

He has a selection of exquisite costumes and plays the hurdy gurdy, lute, cittern, English bagpipes and the extremely rare colascione. His songs range from romantic Florentine and Neapolitan songs to risque English ballads. Dante has performed in countless historic settings in the UK and abroad. He is perfect for any occasion requiring quality period music and his total professionalism guarantees delighted clients.

Part one features works by Kapsberger, Santino Garsi da Parma, Giorgio Mainerio and anonymous Neapolitan love songs. Items on the colascione are played in this programme.

A mixed first half of English, Italian and French music and songs on lute, cittern, orpharion, hurdy-gurdy and colascione. The second part focuses on Henry Purcell and his contemporaries.

Concert programmes can also be created to accommodate a theme or anniversary.

Dante also offers a show, Finery & Filth, which combines early music, spectacle and stand-up comedy. Set in 1695, it takes the audience through a vivid and ribald tale of Restoration England…and the Restoration Rat Pack. Available in three versions: Concert – 2 hours including interval / Festival  – 1 hour / After dinner – 30 minutes.  Warning! Finery & Filth contains lyrics not suitable for those of a Puritan disposition.

• Entertained at the home of Bill Wyman for a party commemorating the 800th anniversary of his village in Suffolk.

• Entertained Luciano Pavarotti after one his his rare concert appearances in England.

• Entertained Elton John and his guests at his Windsor home for his Aids Foundation Gala Dinner, July 2000.

• Featured in The Times magazine, article on bawdy ballads, April 2003

A few recommendations that appeared unprompted on various websites

“Completely and utterly brilliant! Dante set the scene and added to the atmosphere of this old, quirky and historical setting we had for our son and daughter-in-law’s wedding. From the minute we booked him, Dante was reassuringly professional and did everything he could to make the day the success it was. His performance goes beyond his clear talent – his charm and wit merely added to the overall enjoyment felt by all our guests. They truly did not stop talking about how fabulous he was. Different costumes, different instruments all kept the interest from beginning to end. Truly Dante we can not thank you enough….”

“Hired Dante for our wedding at Yaxley Hall, Suffolk. He is unique; and a charismatic and talented musician. Providing both formal accompaniment to the ceremony and informal entertainment for our guests afterwards and always attentive to the requirements and sensitivities of his audience. If you’re looking for something different, to keep your guests talking long after the event, Dante’s the man.”

“We hired Dante to perform at our wedding, in particular playing to lure guests across the Oxford cobbles from one venue to another. He certainly performed expertly, blending the beautiful with the bawdy. He was particularly well attuned to context, intuiting who would most appreciate a ribald verse and who a simple ditty – important at a wedding with guests ranging from college friends to elderly relatives. He was reliable and punctual.”

“I hired Dante to perform at my wedding a few years ago and I can not speak highly enough of his work. He really helped make the day one to remember! Everybody spoke highly of him and he did a fantastic job of entertaining the guests throughout the day and also during dinner. I would recommend Dante as an extremely charismatic and fun addition to any event.”