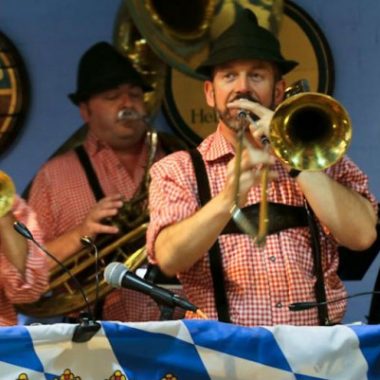 Thank you for a fabulous night, everyone had a blast and what a great band you are!... 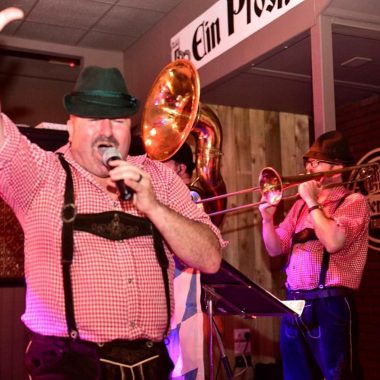 You guys should go to Germany & perform at Oktoberfest there, you’d be the best band by far, and I’m from Bavaria!”

The Edelweiss Bavarian Showband will tailor their performance to entertain your guests with party games and fantastic Bavarian Oompah music.

They are the Oompah Band to the stars! Having performed for Ant & Dec, Stephen Mulhern, Dermot O’Leary, Keith Lemon, Vernon Kay, plus many more!

Their show includes games, audience participation, sing-a-long, and lots of dancing. They get everyone swaying from side to side in time to the music, just like in traditional Bavarian halls.

The band are so experienced at these events, that they judge each function individually, and will tailor the show to suit your guests.

The 1st set is traditional Bavarian music, with a lot of audience participation! Plenty of hand clapping, swaying, and thigh slapping involved!

The 2nd set is the “party set” to get everyone up dancing. This set includes more audience participation, as well as dancing classics such as Hey Baby, Rock Around The Clock, Delilah, Sweet Caroline, Daydream Believer, YMCA, The Can Can, Hey Baby, Amarillo, Don’t Stop Me Now, & Wipeout. The final number is always New York New York which brings the evening to a rousing finale.

“Thank you for a fabulous night, everyone had a blast and what a great band you are! The games were brilliant to break up the mood, and we all loved the party songs at the end of the evening.”

“Thank you for doing a great job on the night. The feedback from the audience was very positive and everyone had a great evening. If we do it again next year, I’ll definitely be back in touch. Cheers!”

“You did a fantastic job and I had compliments on your entertainment from many of the guests, including the Germans!  We all had a lovely time, and thank you all for helping to make it a really special and memorable birthday for my husband.”

“The evening exceeded our expectations and the feedback we have had has been remarkable. At one point in the evening I observed that everyone was swaying from side to side even when they were sat on the table. Thanks again and I would have no hesitation in recommending you to anyone who wants to have a ‘slightly different party’.”

“The band were fantastic. Everyone had a such a great time – there was no end of people who came up to us to say how much they loved the band and the show – it really was the icing on the cake on what was already a great day. Please let everyone in the band know how well they went down – you did such a great job!”

“I would like to thank you all for making our 35th birthday celebrations so special. Even now there are choruses of “to the left, to the right, forward and back, stand up sit down!” My team absolutely loved you. Thank you so much.”

“What a brilliant performance. We’re still laughing now. The comments from our guests have been equally as positive. The swaying, German toasts, games (particular the hat race, stein holding, and bongo drums) plus the conga lines … you were a hit! And despite the hot weather you and the band were most professional. Once again, many thanks.”

“You guys should go to Germany & perform at Oktoberfest there, you’d be the best band by far, and I’m from Bavaria!”