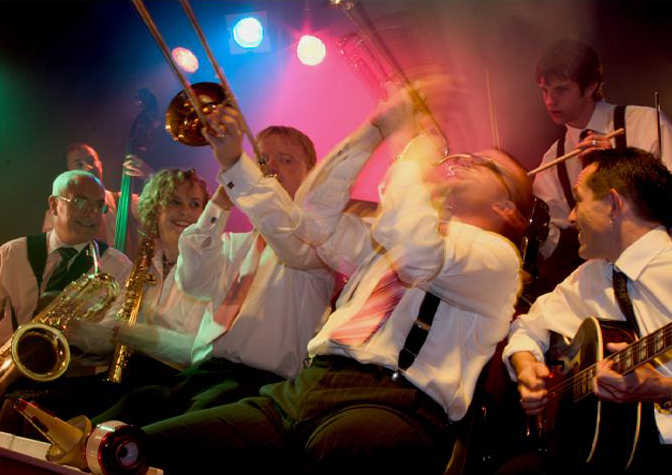 No gadgets, gizmos or electronic thingamywotsits we don't know how to work... just down to earth, honest-to-goodness live music.

No gadgets, gizmos or electronic thingamywotsits we don’t know how to work… just down to earth, honest-to-goodness live music.

The Funky Butt Swing & Dance Ensemble are named after a club in New Orleans. The atmosphere of colour, vitality and elegance the city is famous for is something they try and bring to their music. The band were also pretty taken with the idea of popular dances (waltzes, mazurkas, quadrilles, twosteps, etc) fused with the blues and rhythm of African culture and the virtuosity of Creole instrumentalists evident in New Orleans at the turn of the last century. (The Funky Butt Club was itself named after the original hall where the ‘first man of jazz’ Buddy Bolden held court and lead the house band).

The aim of this band is to provide complete customer satisfaction by performance of outstanding quality live music. They write all of their own arrangements so they can explore the repertoire of countless styles of toe-tapping stuff. The band comprises two brass instruments, two reed instruments, vocals and rhythm. No gadgets or gizmos, just real musicians playing real instruments in the time honoured tradition.

One speciality of Funky Butt is their ability to play ballroom dance genres at correct tempi. This is increasingly in demand since the popularity of Strictly Come Dancing on British television. The band can perform authentic renditions of strict tempo ballroom styles such as Cha Cha, Rumba, Jive, Tango, Quickstep, Foxtrot, Mambo, Samba etc, and even publish the tempo of each dance style!

As well as countless private and corporate functions, Funky Butt have performed for:

The British Chamber of Commerce

“We thoroughly enjoyed your music and it set a great atmosphere for the day. We have had much positive feedback from everyone, commenting on how professional and enjoyable you were. Many thanks to you all and we will be putting out recommendations for you!” Catriona Howells, Hampshire (retirement party)

“Many, many thnaks indeed for your invaluable contribution, your good humour and your good offices generally. We are all very grateful, not least myself.” John Perrot, High Commissioner, British High Commission, Banjul, The Gambia (Queen Elizabeth II Jubilee celebrations)

“I have to say – what a TRIUMPH!! The calibre of performance, and attitude of the musicians was of the highest order. I was thrilled with your band once again, and I look forward to many successful projects with the Funky Butt Jazz and Dance Ensemble in the future.” John Burrows OBE (Scarlett Productions)

“I feel I must write in order to thank you for a charming performance at our anniversary garden party. We all enjoyed the dancing and it was lovely that your music appealed to everyone from my husband to my great grandson.” Rita Cole, Hampshire (golden wedding garden party)

“As chairman of the South Downs Dance Association I would like to thank you for your recent performance at our annual dinner. The band really were excellent and please pass on my thanks to the musicians for their excellents showmanship and musicianship throughout the evening. The committee were unanimous in their decision to invite you to return again for this event next year.” Donald Cooper, West Sussex (South Downs Dance Association)