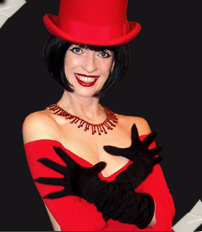 Holly Penfield, outrageous, sexy, fabulously costumed, London based cabaret and jazz singer. Will blaze a high-heeled trail through your next festival or event!

... a native spark of wit and flash that most performers can only dream about... 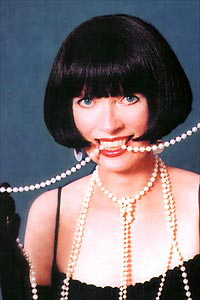 ...Her voice has a vast range of emotional highs and lows that are pure and inspiring...

Holly Penfield is a native of San Francisco. Like Josephine Baker, she was lured by the European mystique but made her career in London rather than Paris. Achieving great success as a jazz cabaret singer she appeared at Pizza on The Park, Cafe de Paris, Beach Blanket Babylon, Pizza Express, China Jazz, and Scott’s on Mount Street – where she was (like Sally Bowles) the toast of Mayfair! Her extensive repertoire includes all the well-known jazz standards by Ella, Peggy and Sinatra plus great cabaret showstoppers including: ‘Diamonds Are A Girl’s Best Friend’, ‘I’m A Vamp’, ‘Big Spender’, and ‘New York, New York’.

She has also sung in many prestigious London hotels including The Landmark, Lanesborough, The Mandarin Hotel in Knightsbridge and The Ritz (at a private party for Prince Andrew and Sarah Ferguson). She has held a residency at The Dorchester on Park Lane and has twice played New Year’s Eve galas at the Millennium Hotel.

In addition to public performances, she has done hundreds of exclusive private parties all over England and Europe. She recently was a headliner for a two-week Princess Cruise down the Mexican Riviera. In London Holly has blazed a trail on the lively cabaret and burlesque scene. Many performers have followed in her high-heeled footsteps at the Soho Revue Bar, Volupte Supper Club and the historic Cafe Royal. In the huge London Hippodrome in Leicester Square Holly participated in the “Miss Alternative World ” pageant, wearing wild costumes by a designer inspired by her electric stage presence. Holly is often hired for her creativity with elaborate costumes to fit special themes, including a recent show in historic vaults underneath London Bridge for an event built around “Dante’s Inferno” illustrating the seven deadly sins. In addition to performing in upmarket establishments, she also has a fondness for appearing in unorthodox venues including wine cellars, boats and hot air balloons.

“Vegas may have Elton and Celine, but now Soho has its own devilishly talented singer in residence. Holly Penfield could give either of these divas a run for their money, not just for the power of her vocals but in terms of sheer old school glamour. Holly has established herself as the premier cabaret performer.” Evening Standard

“Holly Penfield is more than one fine diva — she’s a whole host of them, and they all look wonderful and sound sensational.” Sir Tim Rice

“From lewd self-penned Weimar era numbers in a Liza Minnelli black wig and basque, to a wrenchingly poignant rendering of Joni Mitchell’s “Both Sides Now”, Penfield can neither be second-guessed nor her banter bettered. It’s impossible to imagine how much more someone could give to their audience. A flaming glitterball of passion, glamour and joie de vivre.” Metro

“She is extraordinary. Everything about her — her voice, her persona, even her clothes… she is a performer to surrender yourself to… You should take this opportunity to enjoy this wonderful, outrageous creature, with her extravagant, colorful plumage…. a captivating, compelling performer.” The Scotsman (Edinburgh)