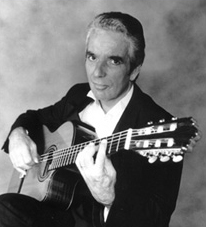 Guitarist and singer for hire.

...an enthralling performance backed by an outstanding ensemble… a night of real class... 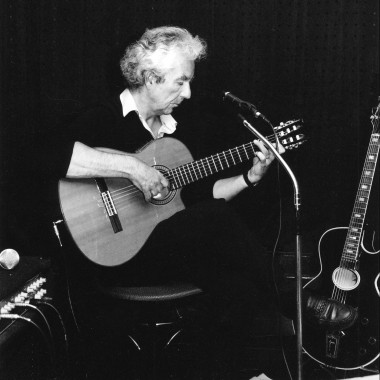 ...Guitarist Jamie Moore knows how to knock out a good tune...

…the smoothest guitarist – vocalist ... with a melodic style and selective electicism...

Guitarist and singer with a very extensive repertoire which covers jazz, pop and classical styles.

Canadian-born Jamie Moore studied composition at Berklee College of Music, Boston, USA and followed that with a masters degree in composition at the University of Alberta. He has several classical compositions to his credit, including UK premieres, but his main musical activity for the last 20 years has been as a guitarist and vocalist.

A most versatile performer, Jamie is able to cover a wide range of jazz, pop standards and classical music instrumentally, but has the added gift of being able to sing to a very high standard. This makes him suitable for a wide range of occasions, for example, background classical or jazz guitar for a wedding or corporate reception, with the option of adding vocals, up to jazz duos, trios or quartets. He also plays in larger ensembles and groups showcasing Canadian music, and has a specialised Christmas repertoire.

‘Guitarist, vocalist and composer Jamie Moore is that rare commodity. A highly original musician… an enthralling performance backed by an outstanding ensemble, a night of real class.’ – Chris Borg, The Stage

‘Quirky and unusual, Canadian singer/guitarist Jamie Moore might be deemed a jazzer but you can’t really accuse him of being superficially mainstream due to the high individuality-count in his corpuscles.’ – What’s On, Birmingham