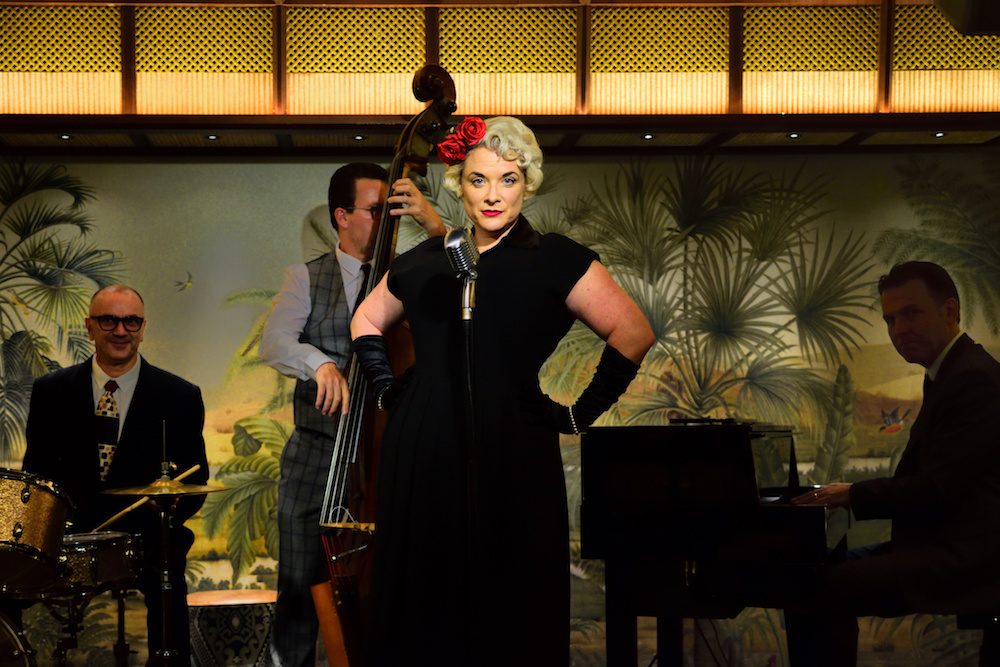 A resident singer at Ronnie Scott’s Club, Kai Hoffman performs all over the world for parties and events as well as the biggest jazz venues. With a huge repertoire of songs, Kai can sing anything from beautiful jazz ballads to 40s swing tunes to blues and 50s rock and roll.

Available with her five-piece band, or smaller combinations - as a solo artist, duo (with piano), trio (with piano/double bass), quartet (piano/bass/drums). 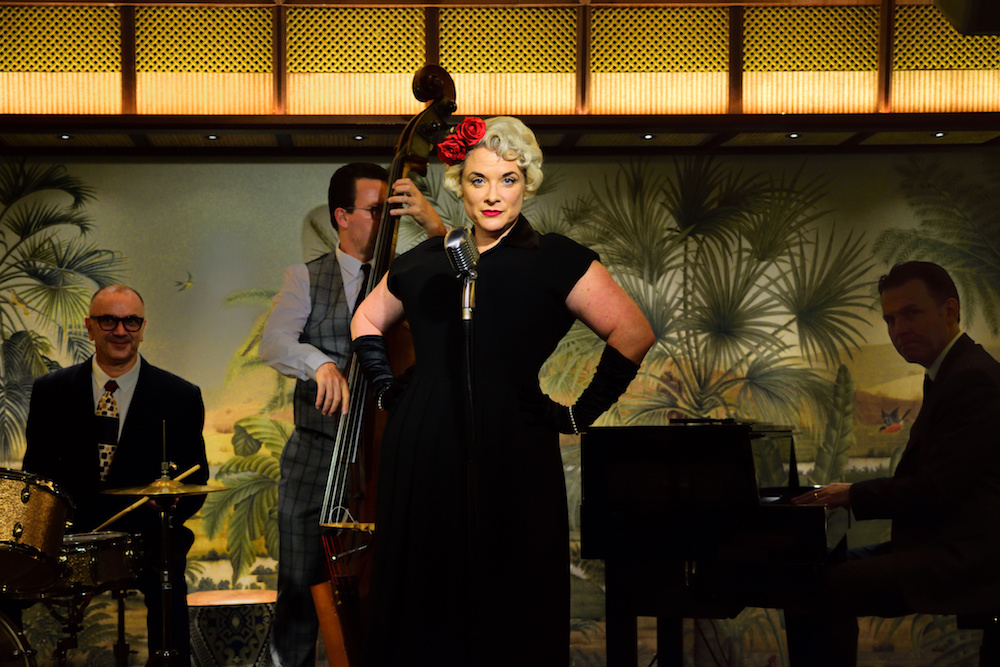 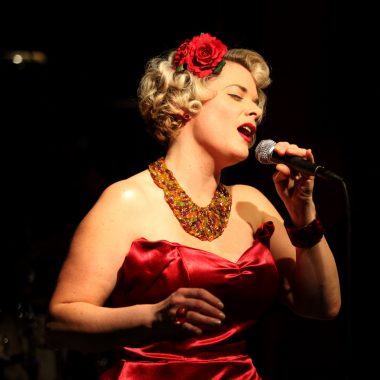 The Whole Package from Head to Toe 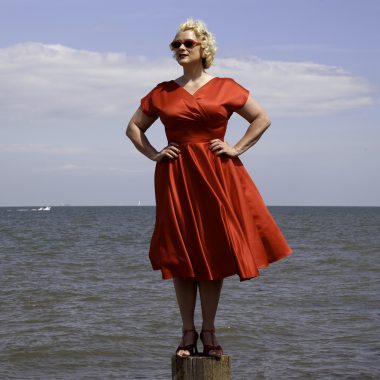 Everything was absolutely perfect -- the songs you chose were wonderful and the way you got the guests dancing was great.

Originally from Boston, MA, USA, Kai Hoffman is a blues, jazz & cabaret singer, songwriter, bandleader and recording artist based in the United Kingdom. Kai’s international reputation is growing steadily with shows including Don’t Tell Mama and the Metropolitan Room in New York City, The Blue Note in Milan and the European Jazz Expo, with further performances in countries as varied as Bangladesh, the Netherlands and Russia.

Deemed “The Whole Package from Head to Toe” by Jazzwise Magazine, Kai will add glamour and sophistication to your event, whilst delivering a top level performance. Kai is also available for cabaret-style wandering.

In London, Kai is a favourite performer across the city, including an eight-year residency at Europe’s oldest jazz venue, Ronnie Scott’s, shows at the Elgar Room of the Royal Albert Hall, the London Jazz Festival, City of London Festival, Southbank Centre, 606 Club, the Hideaway Jazz Club and more. Kai can currently be seen on a residential monthly basis with her five-piece 1940s Kombo at the beautifully art deco Oriole Bar in London’s Farringdon.

With three previous jazz and swing releases under her belt, Kai has just released her second solo album, Luckiest Girl Alive, via her own label, Broadreach Records. The new album includes a mixture of Kai’s own fantastic originals, authentic rhythm and blues and rock ‘n’ roll, with a dose of ‘50s New Orleans thrown in. The album is getting great reviews, ranked in the top ten by Blues Matters Magazine, and is “…ideal for a good ol’ knees up or rollicking shimmy on the dance floor…” according to London Jazz News.

Kai’s first solo album Do It While You Can gained much critical acclaim. “Kai Hoffman ensures that a good time is exactly what’s on offer, crafting a set of songs that makes the most of her personality, her slightly tongue-in-cheek naughtiness and her effortless joie-de-vivre.” – Bruce Lindsay, All About Jazz.

In 2015, Kai showcased her songwriting talents for the first time with her one-woman, one-hour show for the Edinburgh Fringe Festival “From Geek to Goddess”, including fifteen original songs (with some songs co-written with double bassist Dave O’Brien). Four of Kai’s originals from this show can also be heard on the album Luckiest Girl Alive. Kai will be premiering a new self-penned one-woman show at the Edinburgh Fringe in 2016, titled “39.”

In 2010-2012, Kai toured and recorded with jive superstars Ray Gelato and the Giants and can be heard together on their duet album Hey Boy! Hey Girl! She has also been invited to sing with vintage-style bands including Vince Giordano and the Nighthawks and Birdland’s Louis Armstrong Eternity Band in New York City, and in the U.K. with Blue Harlem, The Jive Aces, and the Bevin Boys.

A keen lindy hopper, Kai has performed for dancers many times with her Kombo and also with her former 1940s band, Kai’s Cats. She loves nothing better than a twirl on the dance floor – just ask the crowds at the 100 Club, Twinwood Festival, Greenwich Dance, Hepcats Holiday, or the Rome Rockabilly Festival (where she performed with one of Italy’s boogie woogie superstars, Antonio Sorgentone).

Kai has been featured in print in Time Out, The Stage, The Evening Standard, Metro, Blues Matters, Classic American and Milkcow, and interviewed on BBC Radio London by Robert Elms, Nikki Bedi and Joanne Good, and on BBC Ulster by ‘Jazz Club’ host Walter Love in an hour-long feature show, as well as on Jazz FM and numerous other local and internet stations around the world.

Sponsored by award-winning vintage reproduction fashion brand Vivien of Holloway, expat-American Kai Hoffman always looks like she’s just walked out of a classic Hollywood glamour shot, and has a “Marilyn Monroe look [and] lovin’ it style” (International Review of Music).

Kai is a graduate of the Royal College of Music, London, as well as the Hochschule fuer Musik in Cologne, Germany, studied for three years at the Manhattan School of Music in New York, and can also play the French horn (very well), the trumpet (fairly well) and the ukulele (very badly)!

In addition to her live performance schedule, Kai is also dedicated music educator and is available for private instruction.

In her spare time, Kai can be found either attempting a masterpiece in the kitchen or, weather permitting, sailing a dinghy!

“There is no denying that Hoffman has a very special voice: rich, super smooth and full of old time sparkle… It is a joy to listen to her sing.”
BROADWAY BABY

“ [Kai] is the whole package, from head to toe ”
Jazzwise Magazine

“The Kai Hoffman Quartet are sensational, performing material old and new, beautifully arranged, greatly crafted and performed perfectly by this collection of top musicians. Kai and her band deliver a real understanding and connection with this genre of music, a real togetherness that infects the audience”
London Jazz News (Live Review from the Elgar Room, Royal Albert Hall)

“Thanks so much for helping us celebrate the most perfect wedding day! Kai was a huge hit and we loved having her there.”
Myra & Shaq, Wedding Clients

“Kai, I am sending you the biggest thank you! You and your band made my party night amazingly special! Everything was absolutely perfect — the songs you chose were wonderful and the way you got the guests dancing was great. We all had so much fun and it was an event all the guests will remember always.”
Ellie, Birthday Party Client

“I just wanted to say a huge thank you from Toby and I to Kai and the band for yesterday evening. We really enjoyed it and lots of people commented on how much they liked it too”
Helen and Toby, Wedding Clients