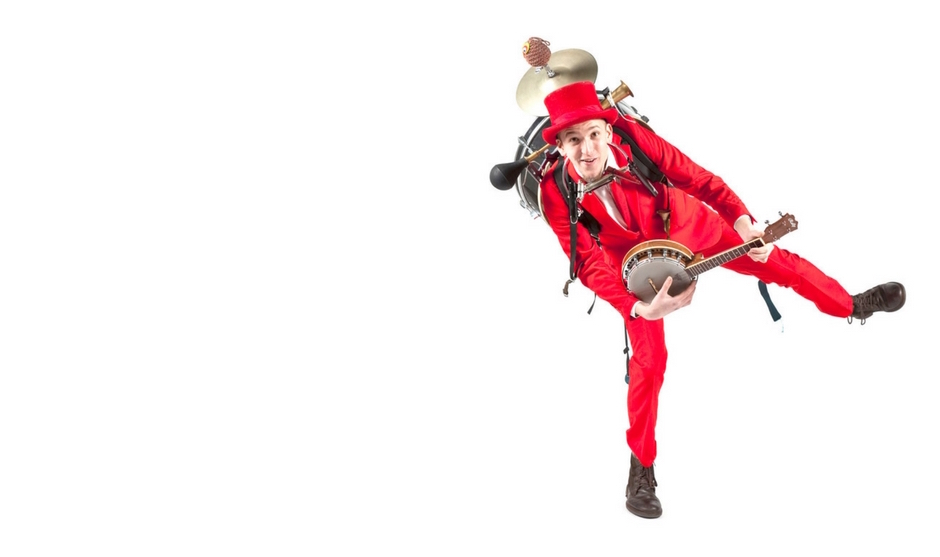 Laurence is a versatile One Man Band who brings new life and energy to this traditional entertainment with his banjo ukulele, honky horns and silly noises! 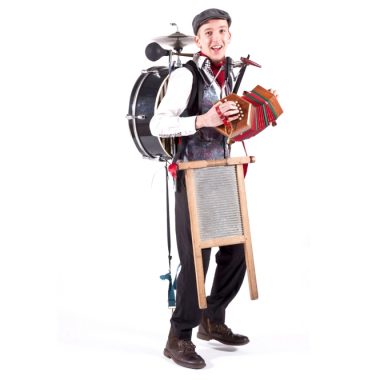 ...He lifts the atmosphere and bestows a ‘feel good factor’ whenever/wherever he plays. 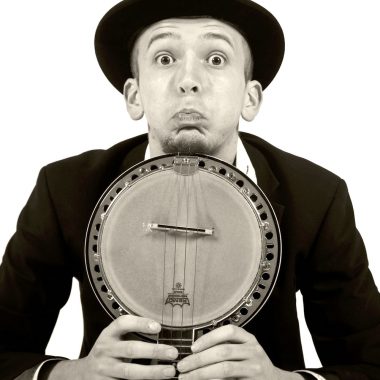 Zany, jazzy and guaranteed to brighten up any event – rain or shine!

Laurence is a young energetic performer who has been performing as a one man band since 2010. Since starting out as a busker Laurence has gone on to perform for parties, festivals, theme parks, corporate events, weddings, shop openings, street festivals, shopping malls and still enjoys a bit of busking when he can fit it in.

A versatile energetic performer playing over 15 instruments all tied to him!

Laurence has entertained crowds across the world from street theatre shows through to tours to the Middle East. He brings a new life to a traditional entertainment with his banjo ukulele, honky horns and silly noises! He sings and dances making a great rhythm for funny cover versions of well-known tunes as well as original comedy songs.

Laurence’s One Man Band is great for all events where you want entertainment to be able to roam around within a crowd and across an event. With a completely self-contained set up Laurence can move around with no need for wires or plugs as he even has a portable PA system on board.

With a large repertoire of over 200 songs ranging from the 1920s up to modern hits he can pull out something to please everyone. A hit with kids of all ages Laurence brings a sense of fun and silliness wherever he roams whilst mesmerising with all of his different instruments and contraptions.

“Laurence is a true phenomenon. You end up watching him for hours as his talents are breathtaking and his show mesmerising. What’s more he is super enthusiastic, and a pleasure to deal with. He comes highly recommended.”

“Over the moon with the performance, everyone was singing along … music just brings people to life.”

“Laurence draws in the crowds when playing at festivals through his music and personality. He interacts with his audience at festivals/events and connects with all age groups. He lifts the atmosphere and bestows a ‘feel good factor’ whenever/wherever he plays.”

“Laurence’s One Man Band is always a fantastic and entertaining addition to our Christmas Market. He brings a lot of fun to the event and visitors of all ages love watching him perform. A real talent and a pleasure to work with.”

“Zany, jazzy and guaranteed to brighten up any event – rain or shine!”

“We booked Laurence for a Corporate office event … talented chap, with an infectious and positive personality and just generally a great performer… Absolutely perfect for the day and he helped perk everyone up. I would definitely recommend him for corporate events. We also threw a few songs at him in advance as a particular request for the day – very funny when converted into the one man band format.”