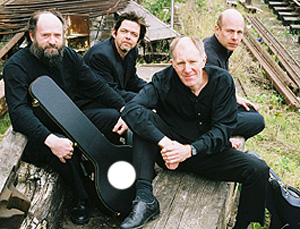 Mandolin music from all around the world from a quartet comprising two mandolins, mandola and guitar:

Mandolin music from all around the world from a quartet comprising two mandolins, mandola and guitar:

David Griffiths
Since buying his first mandolin in an antique shop in 1967, David has played and recorded blues and ragtime mandolin and toured both Europe and the USA. He moved to Bristol in 1974 and, wearing his other hat as a jazz bassist, has appeared in concert, recorded live sessions for BBC Radio 3 and performed at jazz festivals both as a sideman and leading his own septet Mingus Fingers, a tribute band to the late and great Charles Mingus. He plays mandolin and bass with the trio Smile and quartet Hot Strings and works with guitarist Kevin Byrne in the jazz version of his flamenco band Calima. In 1999 David performed the Beethoven Mandolin Sonatas at Ashton Court Festival with pianist John Stein and formed Mandolin Express the following year. David teaches Mandolin, he is on the committee of the Banjo Mandolin and Guitar federation and is their representative on the committee of the European Guitar and Mandolin Association.

Christopher Reynolds
Chris studied as a classical guitarist. His interest in folk music led him to take up the mandolin and he has performed with, and been a member of, several folk ensembles. Chris has studied Irish instrumental folk music and takes part regularly in Irish music sessions in Bristol. Before joining Mandolin Express Chris was a member of the Bristol mandolin orchestra Fingers and Frets.

John Harvey
John Harvey is not only the mandola player for Mandolin Express, but also cellist with string quartet Stringendo, brass band leader, and session musician for theatre and concert performances. His work with youth bands has earned him both respect and rewards. A multi instrumentalist, John plays brass, woodwind and strings so the mandola was simply one more challenge. His arranging skills have played a big part in the Mandolin Express repertoire and his classical experience has been a guiding light in the quartets forays into the classical repertoire.

Kevin Byrne
Kevin is one of this country’s leading Flamenco guitarists. His passion for Flamenco led him to form his own band Calima. Their first CD Madera y Cuerdas, released in 2001, achieved critical acclaim and featured almost exclusively Kevin’s own compositions. Calima continues to evolve featuring dancers and percussionists and has recently emerged in a jazz format. Kevin teaches guitar and Flamenco at the Bristol Folk House and performs both as a soloist and with Calima.

Mandolin Express musicians can also perform solo (mandolin), as a duo (mandolin and guitar) or in a Latin jazz quartet (two mandolins, guitar and percussion).

“Ashton Court Festival – Classical Marquee. 3 mandolins and a classical guitar bringing us folk and music from around the world. Rapturously received by a washed out Sunday evening crowd in need of rest and contemplation.” Venue Magazine

“Just a line to thank you and your fellow musicians for providing such an excellent and appropriate music for our Italian Evening last Friday. We have received many complimentary comments so the evening was a great success.” Cioa Sallie, 60th Birthday Party

“Thank you very very much for the fantastic performances you gave at our wedding – it was beautiful – Santa Lucia was amazing. The atmosphere you created at the reception was happy, joyous and elegant. We truly appreciate the effort you put in to making our day so special and memorable” Eleanor and Paul, wedding and reception