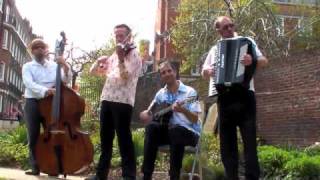 The repertoire of the Marama Cafe Band can be described very well in Romania as ‘cafe concert’ – meaning ‘a bit of music in all styles’ – says group leader Pete Watson. They began in the late 1990’s as rhythm section for the singer Ileana Rozavlea and in the early 2000’s morphed into a larger collaboration of musicians from the Balkans and the UK, playing music from cafe culture around the world.

Pete, who trained as a pianist in the UK, says that he started playing accordion in a style particular to Eastern Europe after many visits there. “My piano teacher was a fairly straight kind of guy. He told me about a colleague of his who’d been to study the Gypsies and their music. They had a completely different training tradition in the accordion, that really interested me.” The accordion is found in many Eastern European and Mediterranean cultures, and as such can tell many stories. “I think it’s the spirit of the music that’s played in Balkan music, it’s sort of free cultural spirit, that really inspires me.”

Having played at the National Liberal Club, National Theatre, exclusive London hotels and private homes, the band are keen to continue working together for the benefit of audiences and keen listeners. They also believe that they can learn a lot from each other and establish the concept of a Cafe Concert more widely in London and the surrounding counties.

A female singer can be added if required.