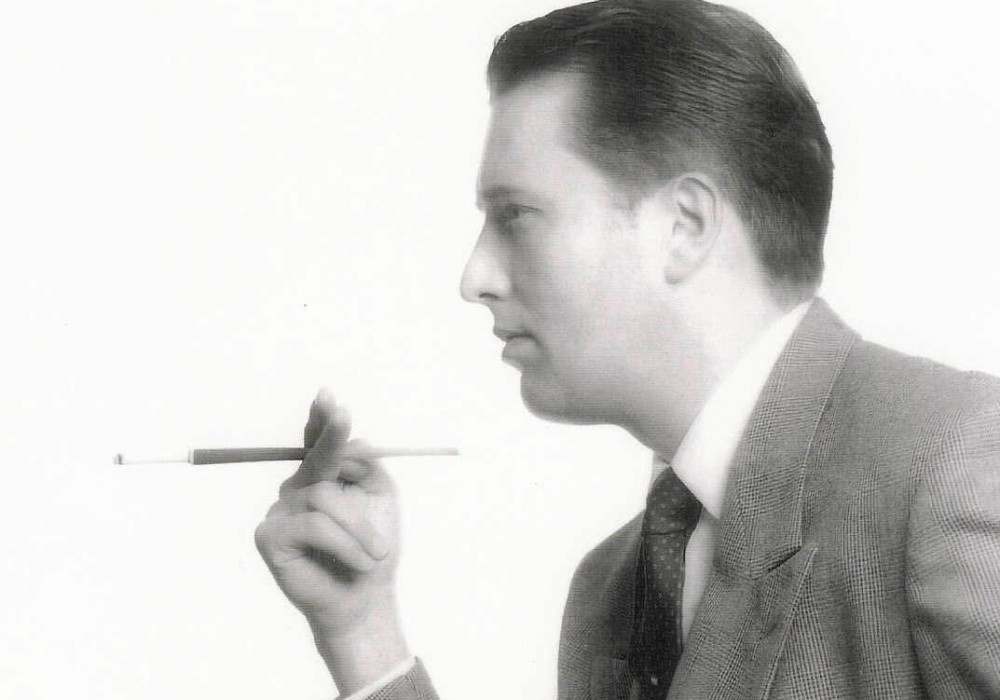 Songs of the 30s singer and pianist for hire.
Michael Law, sings & plays songs of the 30s, particularly by Noel Coward. His cabaret tribute to "The Master" is ideal for sophisticated events & British themes. 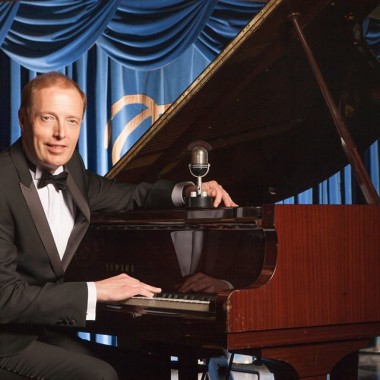 Wonderful diction and sophistication - the quintessence of Coward 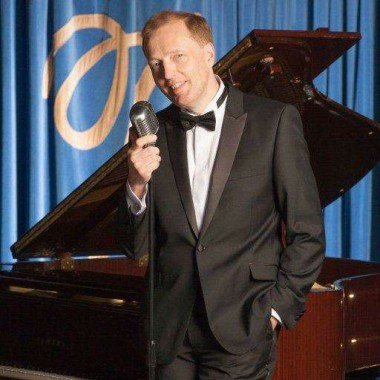 “…even Noël Coward would have joined the ovation for Nina (from Argentina).

Michael Law, founder of the famous Piccadilly Dance Orchestra and leader of 78RPM Jazz Band, is also a world-renowned singer and pianist with a special affinity for the superb comic and sentimental songs of Sir Noel Coward.

Michael took part in Radio 2’s Noel Coward centenary celebration, Radio 2’s three-part series about Coward (hosted by Neil Tennant) and recorded a hitherto unrecorded Coward song for a Radio 4 programme about Marie Stopes. He was interviewed for the Radio 2’s programme about Ray Noble and Carroll Gibbons, “The Bands That Mattered” and was featured both with his orchestra and as a commentator on BBC 4’s highly successful programmes Len Goodman’s Dancing Feet and Len Goodman’s Dance Band Days.

Singer-pianist Michael Law, founder and musical director of the world famous Piccadilly Dance Orchestra is giving a rare solo performance at The Pheasantry, of his show “Easy To Love”. Michael’s warm, mellifluous voice and his unique sense of style match perfectly the great songs of the “Golden Age” of popular song – the 1920s to 40s.

In EASY TO LOVE, Michael recreates a magical world that we might have forgotten, or never known existed. His interpretations make these classic, great songs sound fresh and newly composed – whether There Are Bad Times Just Around The Corner, I’m Putting All My Eggs in One Basket, I Love Paris, Just One of Those Things, Lady Be Good or Nina (from Argentina).

“A marvellously understated performer, his own playing and singing displays his impeccable taste and infallible sense of what a modern-day audience is hungry for – fine music brilliantly but not aggressively, performed. It is particularly in Coward’s deceptively simple love songs that Michael truly excels. When he sings, we are suddenly aware that each song has a heart as well as a soul. But, make no mistake, there is nothing simple about this simplicity. Michael Law’s music speaks directly to the heart and there’s nothing simple about that. He is, quite simply, unique.” Ruth Leon (author of “Gershwin”, “On Musicals” etc.).

‘Love is the Sweetest Thing’ Celebrating the remarkable life of AL BOWLLY – and the glorious songs he sang.

Al Bowlly is now celebrated as one of the greatest popular singers of all time. He could melt your heart with those great ballads – or make you tap your feet to the swingy jazz tunes of the period.

Al’s fascinating life story and superb artistry, from humble beginnings as a singing barber in South Africa to stardom in the Britain and the U.S. have kept his name increasingly to the forefront in the decades following his tragic death during the London Blitz.

As a musical historian and a superb ‘crooner’ and pianist, Michael Law is perhaps uniquely placed to tell the story of this remarkable man. The show is packed with anecdotes and fascinating show-business secrets … and above all, a wealth of glorious songs, including The Very Thought Of You, Love Is The Sweetest Thing, You’re Driving me Crazy, Who am I?, Midnight, The Stars and You and Brother, Can you Spare a Dime?

‘A Talent To Amuse’ is the title of Sheridan Morley’s monumental biography of Sir Noel Coward but it’s also a description of what Sheridan Morley himself (1941-2007) could do. As author, broadcaster, critic, director, and raconteur, Sheridan could captivate audiences with his theatre stories and his anecdotes about his eccentric family which included his father, actor Robert Morley and his grandmother, Dame Gladys Cooper. He wrote more than 30 books out of his intimate knowledge and love of all aspects of the theatre.

Michael Law (singer, pianist and founder of The Piccadilly Dance Orchestra) was Sheridan’s cabaret partner. Together, they toured and broadcast their cabarets all over the world, even recording a CD.

Michael performed in Sheridan’s play “Noel and Gertie” and was an intimate friend. They were working together while Sheridan was writing his last biographies and during his last illness.

In his affectionate and personal tribute to Sheridan, Michael recalls Sheridan’s hilarious anecdotes.

He plays and sings songs from their cabaret shows and explores the biographies which Sheridan was writing during their tours.

“It was a wonderfully entertaining evening – thank you. As you know, I’ve always thought the PDO were brilliant – but you all seem to get better and better. And you seem to be constantly expanding the repertoire . . . with some great new tunes…there wasn’t anything that was less than exceptional all evening.” ROGER KEECH – PRODUCER/DIRECTOR BBC4’s hit documentary ‘LEN GOODMAN’S DANCE BAND DAYS’

“Michael Law is a sort of miracle, a musician and historian with the energy not only to identify what has been lacking in our cultural life but to fill it.  The PDO, his inspired invention, while providing entertainment for his worldwide audiences, has another and equally compelling agenda: it reproduces nearly a century of music which would otherwise be lost.  A marvellously understated performer, his own playing and singing at the head of his orchestra displays his impeccable taste and infallible sense of what a modern-day audience is hungry for – fine music brilliantly but not aggressively, performed.  It is as though he is inviting us to enjoy what he loves, no pressure, no insistence, and along the way he is surreptitiously teaching us about a world that we might have forgotten or never known existed.  Michael Law is, quite simply, unique.” RUTH LEON

“As a stylish interpreter of the Noel Coward songbook, Michael Law can hardly be faulted. Michael has a clear, light baritone, which he uses with crystal diction and impeccable tuning and control; yet there’s plenty of emotion when it’s needed, and really intelligent piano accompaniments. They would be accompaniments beyond the ordinary if played by dedicated accompanists such as Coward’s, but as self-accompaniments, they are little short of remarkable. Michael Law’s is a really thoughtful, musically approach to this music”. THE NOEL COWARD SOCIETY

“Michael Law is a singer and pianist with a deep understanding of the Music of the 1920s and 30s, from Cole to Noel, Gershwin to Kern” SHERIDAN MORLEY

“Wonderful diction and sophistication – the quintessence of Coward” WINDSOR OBSERVER

“… better than the original” Russell Davies, on BBC RADIO 2

“…even Noël Coward would have joined the ovation for Nina (from Argentina).” THE STAGE

“.…this particular show would have been nothing without Michael Law. Coward wrote 400 songs and it was Michael’s impeccable interpretations which brought these songs to life. With wonderful diction and sophistication, Michael is the quintessence of Coward; it’s not surprising that on Radio 2 recently Russell Davies said he sang ‘Nina from Argentina’ better than the original!” WINDSOR OBSERVER

“Musical director and soloist, Michael Law, trained as a baritone opera singer but it was obvious from his interpretations of music and lyrics that he is completely at one with the composers of the 1930’s. His superbly mellow voice and seemingly effortless style, reminiscent of Astaire, was ideally suited to the material. As was the voice of elegant, vivacious Helen Goldwyn, who delighted the audience with her excellent solos. The two soloists sang together in perfect harmony for duets which they performed with sophistication and panache; their lyrical phrasing exploring the nuances of each song.” THE LOWESTOFT JOURNAL

“(Michael Law’s) musical fluency and masterly interpretation of Noel Coward’s humorous lyrics brought a freshness to familiar songs such as Don’t Put Your Daughter on the Stage, Mrs Worthington which had the audience laughing out loud. Other less familiar and slightly ‘shocking’ songs by Tom Lehrer contrasted with the sometimes sad lyrics of Novello and Gershwin and the more serious side of Coward in songs such as London Pride and Someday I’ll Find You, all performed with great sensitivity.” THE KENTISH GAZETTE

“Ruth Leon, Sheridan Morley and Michael Law wowed us at The Pizza on the Park with their evening of Gershwin and Coward. The show began with “I Got Music”, a celebration of the life and music of George Gershwin. Michael Law, at the piano, sang a selection of Gershwin numbers with style and panache…he was on top form. Ruth’s biography of Gershwin has recently been published and she spoke about him, between the songs, with great warmth and vivacity. Pizza on the Park was packed with an elegant audience and to our surprise HRH The Duke of Kent, accompanied by HRH Princess Alexandra of Kent were seated at a nearby table. There was absolutely no pomp and circumstance, but the royal presence certainly spiced the evening with a very Cowardesque touch. Sheridan Morley…took to the stage ..for “Noel Coward – Lost and Found”. He told amusing Noel stories, made all the more immediate because of his own friendship with The Master. Sheridan’s narration was interspersed by Michael performing impeccably, songs such as “Uncle Harry”, “We Must All Be Very Kind To Aunty Jessie”, “This Is A Changing World”, “Something Very Strange”, as well as some of the more well-known ones.”
THE NOEL COWARD SOCIETY

Review of Michael Law in “Cocktails and Laughter” at The Corn Exchange, Newbury for the Newbury Spring Festival.  “Singer /pianist Michael Law was advised by Judy Campbell not to imitate Noel Coward, though there was inevitably a faint echo of the master in Sunday’s performance. Nevertheless, Michael Law is a man with his own style and a creamy voice which caressed the words of Poor Little Rich Girl, turned in a husky, eyebrow-raising version of Mad About The Boy and gave a fillip to Miss Worthington’s theatrical ambitions and the glorious Bar on the Piccola Marina – all Coward songs which will last as long as people have ears. But this was not only a Coward evening and among the others, that wizard word-manipulator Cole Porter was well represented. Michael Law interspersed the songs with anecdotes and we heard that Porter, from a wealthy background, had to wait until he was 34 before his first hit, Let’s Do It, although it is Michael’s singing of Porter’s heart-rending Miss Otis Regrets which remains in my head. Songs poured on from “those who wrote the songs that make the whole world sing” and the spiky humour of Tom Lehrer’s Vatican Rag (“Ave Maria! Gee it’s good to see ya!”) contrasted well with numbers like Maschwitz and Sherwin’s story of that nightingale singing in Berkeley Square. In an ideal world, this was a performance which deserved a more intimate venue. Nevertheless, the excellent Mr Law and those nostalgically glorious songs overcame it.” NEWBURY TODAY