Modou Ndiaye is a virtuoso kora player, vocalist, drummer and percussionist with a superb repertoire of rhythms fusing together traditional and modern beats. 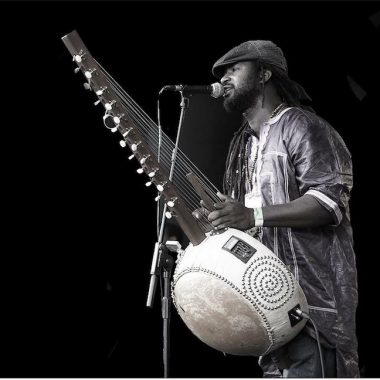 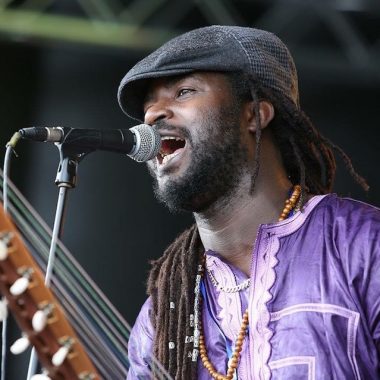 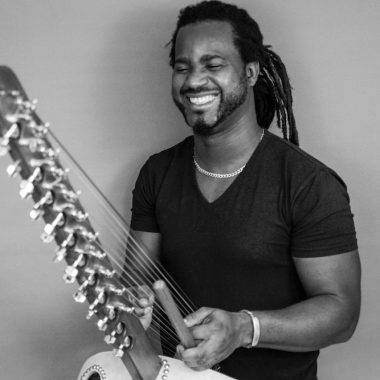 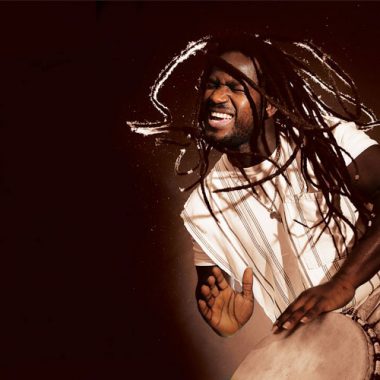 Master Kora player and drummer Modou Ndiaye aka Mamadou Ndiaye Cissokho is a member of the famous Cissokho family of Griot musicians and oral historians.

A Griot or ‘Jali’ is a West African historian, advisor, arbitrator, praise singer, story-teller and entertainer. Essentially these musicians were walking history books, preserving their ancient stories and traditions through song. Their inherited traditions were passed down through the generations.

Modou was born in Lindiane, a leafy suburb of Ziguinchor in the lush green region of Casamance, Southern Senegal.

Growing up in a Griot family, Modou was surrounded by music from a very early age, especially the kora, so it was inevitable that the traditions of the kora would be passed down to him. Modou started learning the kora from the age of five, which was taught by his Grandfather ‘Jali Kemo Cissokho’. At fourteen he began learning the djembe and had soon mastered many other percussion instruments as well.

Modou is very proud of his heritage: he started out playing classical, traditional songs as passed down to him but soon realised his passion and talent lay in incorporating these pieces into his own compositions, creating a unique style of his own.
He plays a variety of West African instruments ranging from djembe, sabar, calabash and talking drum to his leading instrument –the 22 stringed kora (West African Harp).

Since his arrival to the UK in 2002, Modou has completed a national tour and album with Jalikunda Cissokho, a group consisting of 8 family members and founded by his uncle Solo Cissokho.

Developing and creating his own style, Modou then set out on his own journey, performing as both a solo artist as well as with his group at festivals and concerts in 20 countries worldwide, including Glastonbury festival and Womad.

His international shows have taken him to places such as Dubai, Istanbul and Russia among many more and in 2013 he headlined at the launch of the new Montserrat African music festival alongside the iconic Oliver Mtukudzi or ‘Tuku’ which also took him to Montserrat, Guatemala, Barbados and Antigua.

Modou performs at a variety of venues and his concerts range from low key informal shows to larger upscale concerts. In 2016 Modou was commissioned by the high sheriff of Bristol alongside the hugely talented and renowned composer, orchestrator and conductor William Goodchild to write, compose and perform a score with the Bristol symphony orchestra performing the piece at St. George’s hall for the High Sheriff of Bristol’s concert.

In 2003 Modou featured on the ‘Jalikunda’ album by Jalikunda Cissokho alongside 7 other family members.

Modou has recorded on several occasions for Kenny Young, the American songwriter, producer and environmentalist at his ‘Lazy Moon studios’ for APE (Artists project earth) home of Rhythms Del Mundo, overdubbing kora and African drums and percussion rhythms for songs by popular artist such as Bob Dylan, Coldplay, Ed Sheeran, George Ezra among others for the ‘Plastic album’ which was released in February 2018.

Modou’s talent as a solo artist, together with his continuing desire to create new sounds, led him to compose his second album ‘Londo’, recording with group of world class musicians incorporating an irresistible mixture of styles and sounds. The perfect balance of beautiful yet powerful harmonies with the gentle yet lively tones of the kora, bass guitar, calabash, djembe and a variety of African percussion instruments, uniting traditional and modern sounds that leave you invigorated and inspired!

Modou’s music has also been in demand from the global film industry. Commissioned by Warner Brothers in 2006, his djembe playing can be heard in the soundtrack of the blockbuster ‘Blood Diamond’.

In 2008, at the request of Brian Elsley, Modou’s kora playing featured on the teenage cult series ‘Skins’.

In 2015 Modou worked with William Goodchild, William composes and produces music for film and television and has scored for the major broadcasters including BBC, Channel 4, Channel 5, PBS, National Geographic international, Discovery international and Animal planet. Modou’s vocals were recorded by William to feature on the Gorongosa park wildlife series for PBS.

Modou is not only a performing and recording artist, he is also a tutor, teaching Kora and Djembe both here in the UK and internationally at festivals and corporate workshops.

Modou has worked with organisations such as ‘Do you speak Djembe’ and ‘Sewa Beats’ both based in Switzerland and France providing corporate workshops and huge orchestra style shows, mainly in France and Switzerland as well as countries such as Dubai & Quatar.

Modou has also worked with both ‘Live Music Now’ and ‘Superact’ these are charity based organisations that provide participatory performances, workshops and training events throughout the UK. They deliver music to groups in the community whose access to live music would normally be restricted, such as children with special needs, adults with learning difficulties, older people, hospital and hospice patients, prison inmates and young offenders and refugees.

Modou also teaches students in primary schools, secondary schools and colleges, which led him to work with organisations such the Womad Foundation as part of the ‘Singing the Rhythms of Life’ project.

Modou’s dream is spread through his music: the universal language of peace, togetherness, love and understanding across the globe.