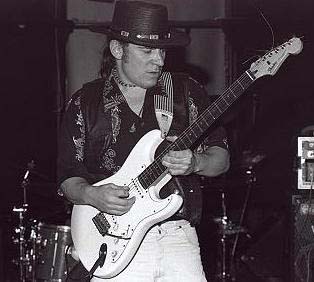 Blues trio led by the astonishing guitar playing of Robin, who played in 1999 at the Albert Hall with BB King’s support band. Superb blues and rock ‘n’ roll covers, and/or great original material, Robin also plays in The Bogus Blues Brothers, and can perform solo and as a duo when space/budget is tight.

Blues, funk, soul, rock, reggae and jazz are all rolled together in The Robin Bibi Band’s own concoction, which can be heard on the band’s first album ‘Blue Thrash Therapy’ – a mixture of the bands most requested songs from the live set, and their own original songs.

Robin formed the Bibi Band in 1996. Having ‘paid his dues’ working as guitarist for other artists and bands he decided to embark on a solo project, born out of his love of the blues.

Like any great performer he has soaked up these styles and blended them into something all of his own!

The Robin Bibi Band have been gigging regularly round the pub and club music venue circuit, mainly in South London and Surrey, and have also been breaking into the festival scene.

The Bibi Band’s live line up is subject to occasional regional changes. Robin can be seen playing with some of the best musicians around – Geoff Cooper, Martin York, Paul Robinson, Chris Bellshaw, Pete Shaw and Ed Spevok. The tried and tested trio format gives each member the space to stretch out and express themselves musically.

It’s exuberant passionate, dynamic, exciting and fun! It’s music played straight from the heart, it will move your head, your heart and of course your feet!