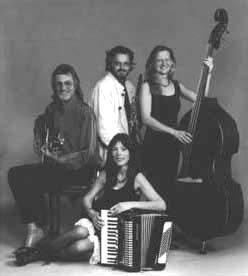 Three or four piece tango band with accordion, guitar and double bass, adding clarinet or fiddle for the four piece.

Three or four piece tango band with accordion, guitar and double bass, adding clarinet or fiddle for the four piece.

Jacqui studied piano under Erik Parkin in Reading and accordion under Mario Conway at Cardiff College of Music and Drama. She now teaches piano and flute privately and plays with Sarah Luton in the duo Paris Moon. A multi-instrumentalist, she plays accordion, flute, saxophone and keyboards in the folk-rock band Sardar Wind with Keith Allen.

Keith’s musical career began as lead vocalist and harmonica player in the blues/rock idiom. He has played with bands as diverse as ‘Hawkwind’ and ‘Fairport Convention’. He also played drums for four years during which time he was a member of Marty Wilde’s band.

Musician, composer and instrument maker, Tim plays saxophone, clarinet and flute in various line-ups, ranging from the ten-piece Pandemonium Band to the jazz trio Mandrake. He plays and researches English folk and church music in The Mellstock Band as seen in TV productions of ‘Pride and Prejudice’ and ‘Tess of the D’ Urbervilles’ and the film of Thomas Hardy’s ‘The Woodlanders’.

Sarah started as a classical musician in the Newbury Symphony Orchestra. She is now a member of the folk band Sensible Shoes and plays Musette (French Cafe Music) on double-bass and English concertina in Paris Moon with Jacqui Doe. Sarah also works as a professional artist.

Piotr was born and brought up in Poland and started playing the violin at the age of 6.  He has lived and worked in England as a professional violinist since 1994 playing in numerous bands in a variety of styles ranging from Hot Club Jazz to Gaelic to traditional Gypsy and Balkan music. He performs on recording sessions and is a tutor at the East London Late Starters Orchestra. His Balkan Gypsy Band Dunajska Kapelye plays regularly at the Vortex Jazz Club in East London and was recently Time Out Magazine’s critics’ choice describing them as “Extreme, virtuoso Balkan Gypsy jazz…..”