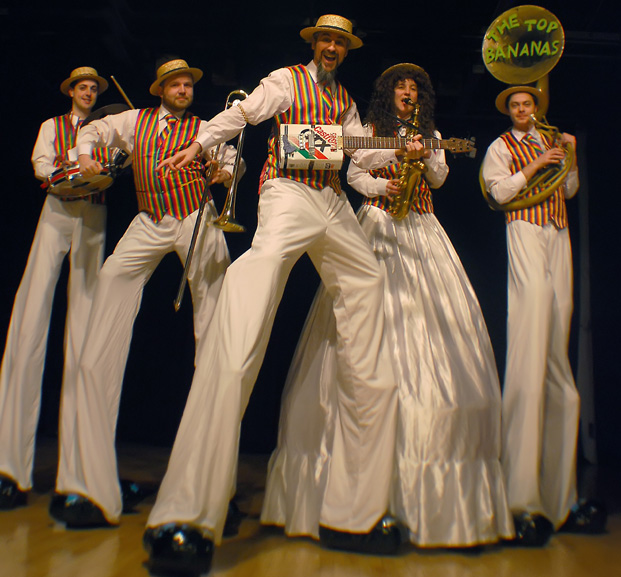 The Top Bananas, a fun stiltwalking band playing jazz, funk, disco and ska classics in a variety of costumes, are ideal for parties, festivals and family fun days. 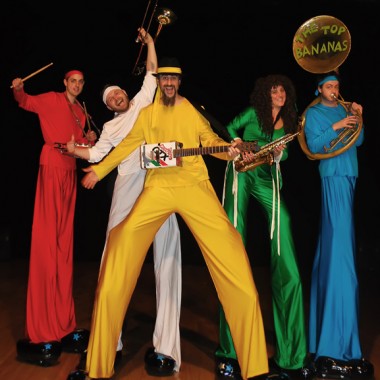 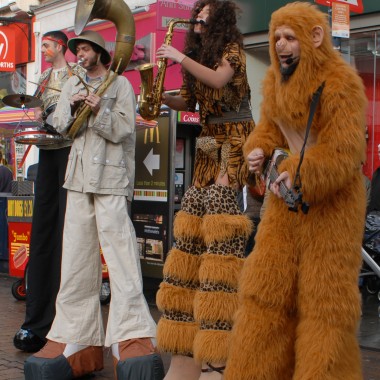 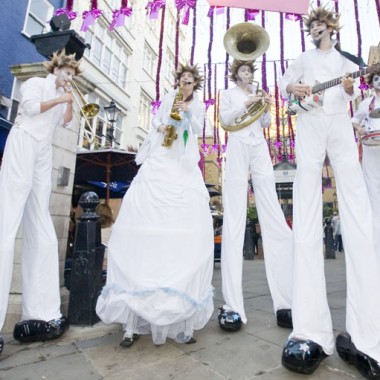 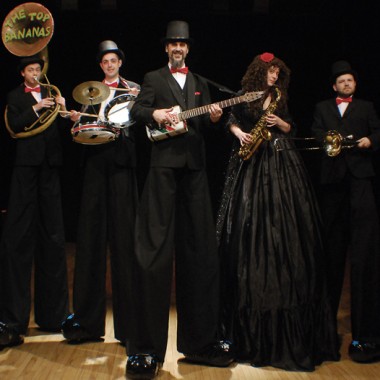 A group of stiltwalking musicians who have brought their experience of performing in other companies (Rumpel Stilt’s Kin, Neighbourhood Watch, Poles Apart, Stomp!) to their own stiltwalking band.

The Top Bananas play music on stilts and are based in Brighton. Their Jungle-themed band on stilts features a leaping monkey on bouncy stilts who plays an oil-can guitar, harmony vocals, horns, bass instrument and percussion. The band is all about fun and plays a selection of Jazz, Funk, Disco and Ska classics. Besides the Jungle Band there are also Enchanted Forest, Colourful Characters, Jack Frosts, Santa, Mrs Christmas and the Elves, Western, Sporty, 70’s Disco, Hippy/Flowerchildren, Floppy Toppers and of course Black Tie versions available. Bespoke themes and costumes possible with enough notice!

“…the band went down a storm – they were fab and it would be great to work together again.” – Julia Restall, UKTV (re: Edinburgh event)

“Thank you SO much for yesterday – you were fantastic! Really looking forward to seeing you again.” – Zoë Clapp, UKTV (re: London event)

“Thanks for being a part of people’s day, it was great having you tall guys wandering around playing your tunes, really added to the feel of the day!” – Tessa Brechin, Brighton & Hove Council

“They are absolutely brilliant and I recommend them highly! We held a multicultural celebration in Hove Town Hall with over 3 and a half thousand people visiting throughout the day. Our performers were a very diverse group from many cultural backgrounds and there were children and families taking part too. The Mayor opened the event and it was also attended by Councillors and MPs.

We were somewhat constricted by budget and so I asked Jim to play as part of a duo (I believe they are usually a five piece). They were exceptionally professional, performed three half hour slots and stayed all day to do this. They performed in the foyer and later when we had a mix up of times up on the main stage they went upstairs and did an impromptu set up there too. They were a real hit and very easy going on what was a hectic day.

“Everyone I spoke to said both that the band was just the perfect choice for the party and thoroughly enjoyed the performances. I will certainly recommend the band for other events. Thanks to you and all members of the band for helping to make the event so memorable.” – Martin Varley, Partner at Thomson Snell & Passmore Solicitors

“You pitched the music perfectly and created just the right atmosphere for the event. The Top Bananas are mentioned a lot on the feedback forms we’ve received with people saying you were a highlight of the day. On top of that, I was grateful that you all just ‘got on with it’ whilst I ran around dealing with car parks and three legged races!” – Roxie Curry, Rochford Council, Essex