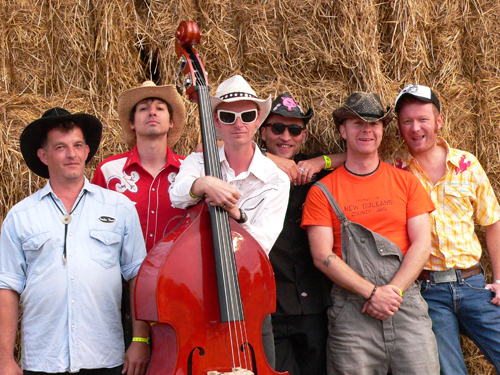 Country-noir and trash rock 'n' roll group for hire.
Made up of members of The Sindys, The Astronauts, Redmaxx and Los Chicos Muertos, The Trailer Trash Orchestra is something of a Trashville super-group.

...combine late punk, Pogues, Byrds before anyone said country-rock, and hoochie-coochie, in a musical bang-bus...

...TTO’s repertoire from Buzzcocks to Gram Parsons is just the sort of pick-me-up needed...

...if this band don't make you smile and tap your toes you've been dead for at least 30 years.

Made up of members of The Sindys, The Astronauts, Redmaxx and Los Chicos Muertos, The Trailer Trash Orchestra is something of a Trashville super-group.

The band came together through a shared love of country-noir and trash rock ‘n’ roll, and their sound pretty much reflects this – like Johnny Cash meeting the Ramones at a party thrown by Gram Parsons who’s got The Pogues and Ween in as house bands.

Within a year of getting together the band were playing storming sets at small festivals, and this led to a prestigious booking at Glastonbury Festival’s infamous Lost Vagueness stage, storming sets at Truck Festival and many smaller festivals, release their “Live at The Garage” mini-album and continue work on a new studio album along with recording new tracks with Knox (The Vibrators) for forthcoming release.

The luxuriant blend of fuzzed up guitars, voodoo-swamp drumming and plaintive lap-steel, fiddle and mandolin make for an intoxicating, addictive and original sound that instils spine tingling delirium whether blasted from a festival stage or in a small sweaty club. Caustic self-penned numbers are augmented by distinctly off kilter interpretations of country, trash and alt-rock gems whilst hats, tats and low-slung attitude leap from stack to stack in frenzied ecstasy!

What some folks have said…

“And fun is a good place to start with the Trailer Trash Orchestra. Anyone who has witnessed The Sindys will know that Grae is a genial and engaging frontman as well as a perceptive and witty songwriter. TTO take this a step further, dressing as you’d expect from the name and playing infectious, redneck, country punk. With the small audience closing in on the stage there is a real feeling of toe-tapping bonhomie as the band rattle through Magazine’s ‘Song From Under the Floorboards’ , Vibrators’ ‘Baby Baby’ and The Cramps’ ‘All Women Are Bad’ as well as Sindy’s numbers ‘Ecstasy’ and ‘Corporation Cocksuckin’ A & R Ass Lickin’ Junkie’ (I think), and a truly insane version of the (not so late) great Crystal Gayle’s ‘Don’t It Make Your Brown Eyes Blue’ which sees our Grae writhing on the stage like a possessed southern preacher-man. The great thing is that these guys are also fantastic musicians and there’s some cool mandolin, slide guitar, fiddle and lead guitar work in there. In my humble opinion if this band don’t make you smile and tap your toes you’ve been dead for at least 30 years.”
Iain

Stumble from tent and over to the Trailer Trash Orchestra on Truck Stage, the perfect hangover cure.
Drowned in Sound

If the Shivers would rattle the spine of a musical purist, the next act would send an authentic critic running for the hills. The Trailer Trash Orchestra whizz, in a country-punk style, through songs from the Ramones, Gram Parsons, and even the new wave heroes Magazine (‘A Song from Under the Floorboards’). Their performance has a power seen only on rare occasion, least of all on acoustic-type nights: making up the orchestra is electric mandolin, fiddle, double bass and, ohh yeah, guitar and drums. The players appear in various local bands, and singer Grae J Wall himself also fronts rock ‘n’ roll wild bunch The Sindys and stripped-down collective Los Chicos Muertos. Stage experience, then, is to be had in spades, and evidenced by the exhibitionist movement of their set. They’re all over the place! With a cowboy hat and a rotten snarl, Grae J dedicates one track to former Eurovision shot Gina G: ‘Corporate Cock-Sucking Arse Licking Junkie’*. Another of their own tracks – or is it a track by the Sindys? – is as much a singalong as any of their covers. The sort-of-romantic chorus of ‘Ecstasy’ goes asking “be my Viagra, be my Paracetamol…” and is excellent.
Grae J also comments on how good it is for once to share a bill with a similar band, rather than some bunch trying to be Oasis. But the real similarity is in the enjoyment of non-pigeonholed diversity. Country-punk? Urban Cowboy? Just call it all good rock ‘n’ roll fun.
yee-ha!
Beat Sketching

Trailer Trash Orchestra combine late punk, Pogues, Byrds before anyone said country-rock, and hoochie-coochie, in a musical bang-bus. You can take them on as Western, Country, Alt-Country, pre-Rock, post-Rock, any number of things, but the baseline is lo-fi and Trash. Every performance is an event, every event is different; but every kind of music they take on board ends up at the side of the road with a bemused look on its face and no fifty bucks.
Lemonrock

After an evening of DJ Marky worship and All Night Disco Partying, the morning after wasn’t going to be made much easier with local Battle Of The Bands victors’ making ‘Sweet Child O’ Mine’ sound even worse than before. Isn’t there some sort of BOTB law that states the winners must attempt said song? Luckily, my faith in cover versions was restored instantly when The Trailer Trash Orchestra , complete with camper-than-campsite pink cowboy hat, burst into a hillbilly rendition of The Ramones’ ‘I Wanna Be Sedated’ . Yee-haw! Shame that The Bad Livers, The Kingswoods and Hayseed Dixie have become more successful with the same idea, but TTO’s repertoire from Buzzcocks to Gram Parsons is just the sort of pick-me-up needed on the morning after.
Drowned in Sound