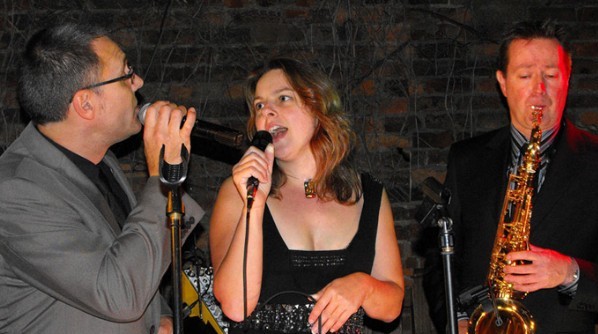 Swing, jazz and jive, a little bit of soul and some classic Rock ‘n’ Roll band for hire.

Swing, jazz and jive, a little bit of soul and some classic Rock ‘n’ Roll!

Phil is a versatile vocalist, fully self-contained with an excellent PA including lights, carefully selected backing tracks and excellent musicians.

His set includes tributes to a whole range of great and fun Vintage music, from Fred Astaire to Frank Sinatra including modern takes on all things retro. He is available in a solo capacity or with a duo/trio/band. He is also available, and regularly called upon, to dep or guest with various big bands.

Phil started out singing in the school choir but only took a serious interest in performing live when invited to sing in a rock/pop band. He spent some years learning opera but only truly found his voice when he took up jazz. His vocal influences are wide and varied, but Mel Torme, Tony Hadley and Frank Sinatra were some of his main influences and inspiration in the early days.

• A Solo set with with vocals

• A Duo with Phil on vocals and Bill McDonough on sax

• A Quartet of Phil, Kathrine and Bill with Steve Brothwood on Trombone and percussion

Bill learn clarinet at school and took an early interest in American big band and jazz. He taught himself saxophone and soon found influences from the New York session players of the day. He is regularly asked to participate in session recordings for various projects. He also currently gigs with a Phil Collins tribute band and function band.

Kathrine, like Phil, started out in the school choir, took up vocal training and continued to sing semi-professionally until she was invited to sing with a local big band. She then went on to help out a local community band where young and inexperienced musicians were given the opportunity to perform in a professionally run group. She currently sings with a big band.

“Well, I think we winged it perfectly! Thanks guys, you were excellent.”
Denise’s birthday, Château de Cocove, France.

“I would just like to say thank you so much for a great night, everyone thought you were brilliant, Andrew and I were so pleased…we could not have found anyone better or more professional in my opinion.”
Marie Stockley, Ashtead, Surrey

“You guys really have it sewn up, thanks for helping to make our 50th wedding anniversary so special.”
Bob and Carol Reid

“We get loads of acts performing here but [you] really stand out in the crowd, you’re a really professional outfit and you sound great. Thanks and hopefully we’ll see you again soon.”
Barry, Newhaven Social Club

“We thought you were fantastic, this has been a great New Years’ eve, thanks guys, I’ll be in touch to get you back later in the year.”
Alan, The White Lion, Redhill

“Phil, thank you so much, you are excellent, we had a fantastic evening, you helped make Lyndsay’s birthday celebrations really special. Do keep in touch, we love to travel and would love to come and see you down in Sussex, email us with some dates. Thanks again.”
Neil and Lyndsay, North Countryman’s Cricket Club, Colchester

A Foggy Day (In London Town)
A Little Less Conversation
A Nightingale Sang In Berkley Square
Ain’t That A Kick In The Head
Ain’t Misbehavin’
All Of Me
All The Way
Almost Like Being In Love
Alright, Ok, You win
Anything Goes
As Long As I’m Singin’
At Last
Auld Lang Syne

Feeling Good
Flip, Flop & Fly
Fly Me To the Moon
From Russia With love

Jump Jive And Wail
Just The Way You Are

New York , New York
Nice’n’Easy Does It
Night And Day

One For My Baby (and one more for the road)