Best foot forward: how to hire a military marching bands 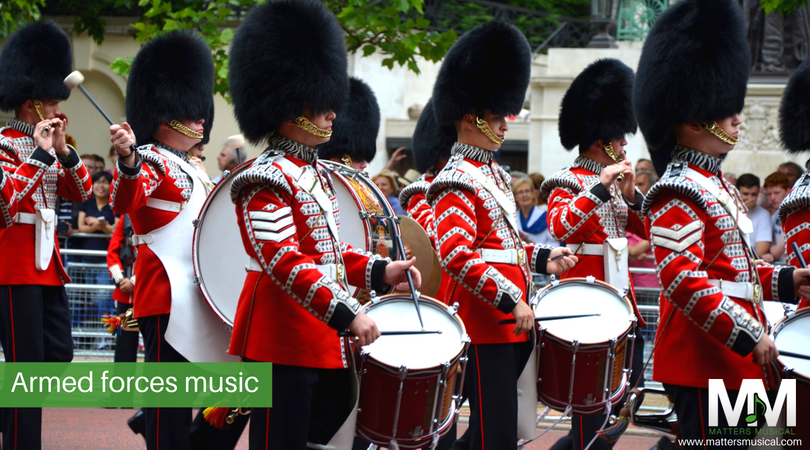 With your musket fife and drum?”

Saturday 30 June is Armed Forces Day, marked with a multitude of events including the National Event in Llandudno in Conwy, Wales. At the centre of most events will be music, played by a multitude of military bands that combine musical excellence with military precision, and very smart uniforms too!

Our nation’s history of military music is really something to celebrate. Each division of the armed forces have their own bands, and their own school of music to train them for ceremonial duties and public performances, in addition to their military training.

Whilst it’s the marching bands that tend o catch the eye, there’s also dance bands of exceptional quality that entertain at Mess events and state occasions alike. And you can enjoy the same excitement of live military music for your events, with Matters Musical.

There are currently 22 different bands in the British Army, and all their members train at the Royal Military School of Music at Kneller Hall in Twickenham. The Corps of Army Music is the largest single employer of musicians in the UK, with:

Most people will encounter Army musicians as part of a military marching band at a state or ceremonial occasion., and arguably that’s where they are most impressive. From the mounted Band of the Household Cavalry to The Band of the Brigade of Gurkhas, it’s an impressive sight for spectators.

That’s why we offer this military marching band for hire:

Band of the 24th Invicta Rifles, The

A traditional military band consisting of ex-regular and current serving musicians from the military.

Nothing starts an event with such style and authority as a trumpet fanfare – and nobody plays them quite like the military! From Crufts to corporate events, the unveiling of new buildings to your wedding day, a trumpet fanfare makes everyone take notice.

This impressive group come usually as a team of two or four, but up to seven players are available. Uniformed in distinctive red tailcoats or military jackets with iconic bearskins, and long silver fanfare trumpets gleaming in the light, they simply can’t be ignored!

The Band of the 24th Invicta Rifles

This band can provide from one to seven trumpeters with percussion for a bridal entry at a wedding to the arrival of your guests and dignitaries to your corporate event. They can play in military mess dress, in white tails or even dressed as Medieval trumpeters – the choice is yours!

Over 170 musicians play in the RAF’s three main bands and associated bands, such as the legendary Squadronnaires, Royal Air Force Swing Wing, Royal Air Force Shades of Blue, and The Salon Orchestra. The Squadronnaires were originally formed to raise morale during WWII and quickly became a highly popular dance band. revived in 1985 as a big band orchestra, they continue to set the standard for big band music in the Glenn Miller style.

This multi-talented band evoke the charm and delight of the big band era, with excellent musicians and talented vocalists to keep your guests dancing all night long. Check out their Profile page, click on their main video, and turn the volume up!

The Navy trains its musicians at the Royal Marines School of Music (RMSM)in Portsmouth. The schools’ buildings were once the Royal Naval Detention Centre, and the thick walls highly effective sound insulation for undisturbed practice sessions! Known for their marching bands an exceptional buglers, the Band recently branched out and supplied a Jazz Ensemble to entertain guests for HRH Prince Harry and Meghan Markle’s wedding reception.

With so many superb jazz acts at Matters Musical it’s hard to pick out just one, so we’ve gone for a classic line-up suitable for a variety of events!

A smooth, mellow jazz quartet fronted by a stunning vocalist for high quality jazz entertainment at corporate and private functions.

If you need a military band for a sporting event, corporate launch or any other type of event, just call us, as not every act we offer is on our website!