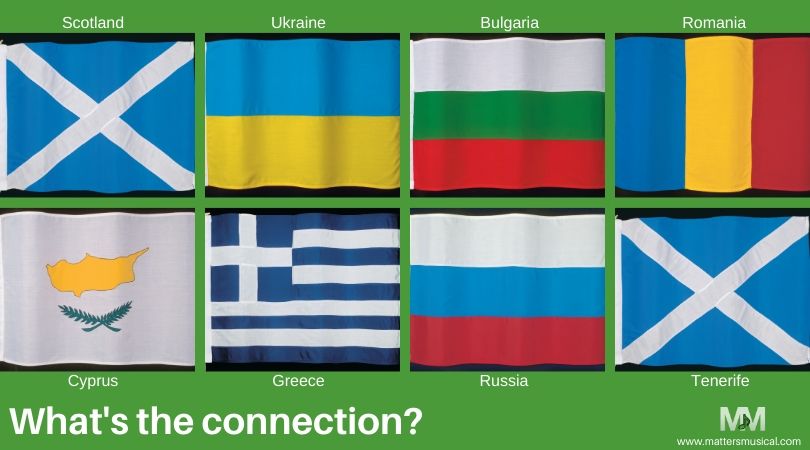 On Saturday 30 November, Scotland will be celebrating St Andrew’s Day. They’re not alone. St Andrew is also the patron saint of singing, and of numerous countries including Barbados, Bulgaria, Colombia, Cyprus, Greece, Russia, and Tenerife, to name but a few. So, if you’re planning to celebrate St Andrew’s Day, the world and its various musical traditions are all up for grabs!

Whilst St Andrew’s Day is a Scottish Bank Holiday, it’s not as big an occasion as Hogmanay or Burn’s Night. However, as the first of three big celebrations in as many months, it’s certainly a good reason to celebrate with Scottish food, music, dancing and of course, whiskey.

According to legend, it was Óengus II, Kings of the Picts, who appointed Andrew as patron Saint of Scotland after a major victory over the Angles. A relic of the saint is kept in St Mary’s Roman Catholic Cathedral in Edinburgh, brought by divine guidance from Constantinople.

Or check out Licence To Ceilidh. Their unique mix of traditional tunes with a funky rhythm section gives the excitement of a function band with the inclusiveness of a Scottish ceilidh.

From the Holy Land to Russia with love

St Andrew was an apostle alongside his brother Peter. He and his brother were fishermen on the Sea of Gallilee although his name is Greek, not Hebrew. He was said to have travelled widely around the Black Sea area, hence his affiliation with countries such as Russia and the Ukraine, as well as Constantinople.

Elsewhere in the world, St Andrew’s Eve is quite a big deal. In Romania, it has probably links to the Roman celebrations of Saturn. It’s a night when wolves speak, but anyone who hears them talk dies. On the day itself, mothers cut fruit tree branches to make a posy for every member of their family. Or they can plant wheat in a dish. If your bunch blooms or wheat sprouts by New Year, it’s a good omen. In other Slavic countries, it marks the start of the vampire season!

Whilst we haven’t got a vampire-themed act at the moment, (we’ll keep you posted), we do have wonderful musicians who specialise in music from Eastern Europe. Tziganarama take you on a journey from the mountains of Macedonia to the Russian Steppes; from the gypsy campfires of Hungary to the Jewish ghettoes of the Ukraine, and from the forests of Romania to the cafés of Prague and Vienna.

Nothing (not even vampires we suspect) will faze this talented trio – they have played for the Crown Prince of Jordan at his palace in Amman, at a party in Elton John’s back garden, in front of the shark tank at the London Aquarium, and for the Lebanese mafia in a Beiruit nightclub!

St Andrew is revered in Cyprus, as it is said that a ship carrying the saint was wrecked on the island when blown off course. Th saint came ashore and struck a rock with his staff, creating a holy spring with healing qualities. The Apostolos Andreas Monastery stands above the spring on the Karpas Peninsula in northern Cyprus, a place of pilgrimage for both the Greek Cypriot and Turkish Cypriot communities.

Go Greek with The Greek Band, for a fabulous evening for all ages including how to dance the Sirtaki and Zorba the Greek, a Greek Belly dancer and plate smashing.

Or book our Traditional Turkish Band, a popular ensemble who play derbouka, saz, oud (or ud), violin and Turkish vocalist. This talented troupe has played at over 1,000 Turkish, Greek and Turkish Cypriot weddings and functions.

Not quite what you were looking for?

Call us! We’re happy to create a bespoke entertainment package for almost any event, for any reason, almost anywhere in the UK! We’ve even created specialty acts for clients in the past, bringing together unique collaborations of global music artists for a unique experience. Just like St Andrew, Matters Musical are truly international, if a little less miraculous…