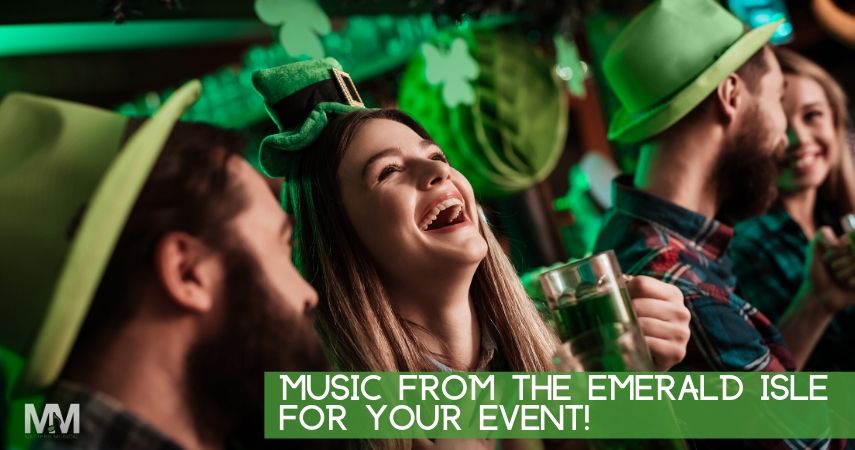 St Patrick’s Day is when the world turns green, and anyone with even a drop of Irish blood  in their ancestry goes misty-eyed about the Emerald Isle over a pint of Guinness or an Irish whisky. As with any celebration in Ireland, music is always at the heart of St Patrick’s Day events, whether marching pipe bands in parades, accompanying fleet-footed Irish dancing, or a folk band in a pub.

If you’re planning a St Patrick’s Day event, check out our wonderful Irish acts that will bring both authenticity and energy to your event.

From traditional airs to cutting edge fusion, these talented musicians can play up a storm  for any celebration.

These guys cover a lot of bases, from traditional celtic music to a ceilidh (Ceili) band, as well as Latin, jazz and even classic pop. Perfect for an evening when you want a blend of old time tradition and dance floor fillers.

For Irish traditional music at its best, singer Paul Brennan and his band are hard to beat. Their sets move effortlessly through slow airs, arp music, jigs, reels and hornpipes, to contemporary Irish rock.

Get everyone up and dancing with this excellent Irish Ceili band.

A superb band playing high quality traditional dance music, led by fiddler Hazel who has a Phd in Irish music! A bands with a ‘can do’ party attitude, the Allstars place the emphasis firmly on audience enjoyment and participation.

Modern Irish dancing has risen to new heights in the last decade, with new groups pushing the art form to new levels of entertainment, but withou tnlosing teh essential traditions. At Matters Musical, we’re thrilled to have on our books three of the best Irish dance troupes you could hope to see. Perfect for big stages and large scale events, conferences, product promotions, or just for the sheer excitement.

A team of young Irish dancers performing in a contemporary style, original choreography presenting a stunning show, with opportunities for audience participation at the end.

One of the finest Irish dance troupes available in the UK and Ireland, many of whose dancers are championship medal winners, and whose choreographer was five times World Irish Dance Champion! Refreshingly authentic and reassuringly modern, this company present a show audiences will really warm to.

If you like your Irish dancers to stay close to the floor, don’t book Celtic Footwork! Their dance routines combine intricate footwork and high-energy routines that literally lift the dancers and your spirits.

This is the troupe that danced with Ant and Dec on their Saturday Night Takeaway show! (There’s a great video of this performance at their Profile page below – just look how hard Ant is concentrating!) This company’s exciting 30-minute performance includes a Riverdance routine and opportunities for audience participation.

St Patrick’s Day celebrates the arrival of Christianity to Ireland on the date of St Patrick’s death. The day has been celebrated by various Churches on 17 March since the early 17th century. Patrick was probably born into a wealthy Roman-British family in the 4th century. According to the Saint’s own work, the “Declaration” he was kidnapped and enslaved in Ireland as a shepherd. In a vision, he was told to flee to the coast where a ship would return him home. He became a priest, and returned to Ireland to convert the pagan Irish to Christianity.

St Patrick’s Day is a public holiday in Ireland, Northern Ireland, Newfoundland and Labrador, and (rather oddly) Montserrat. It’s also the world’s most celebrated national festival, with big celebrations in America, Australia and anywhere with a large Irish ex-pat community. The large St Patrick Day parades began in the US in the 18th century, but didn’t catch on in Ireland itself until the 20th century. The biggest parade in the UK is held in Birmingham, although parades in London, Liverpool, Manchester are not far behind in terms of size. What has probably made St Patrick’s Day really popular is the lifting of the Church’s Lenten restrictions for the day on drinking alcohol!

Choosing Irish entertainment for your event

Not sure quite what sort of entertainment is right for your event? Call us. We can guide you through some ideas, from the big stage shows to intimate performances by some of the most respected Irish musicians.

Not just for St Patrick’s Day

Our Irish bands and performers are busy all year round performing at a wide variety of events including weddings, anniversary parties, corporate events, product launches, tourist events, festivals and many more. Call us with your requirements.