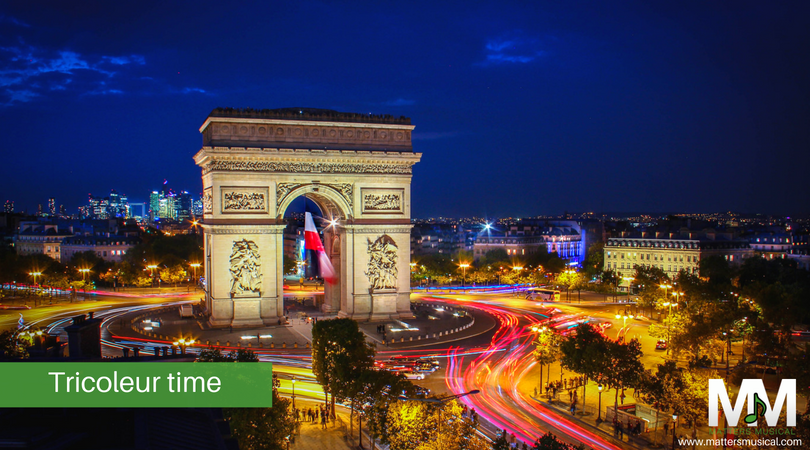 It’s a bit of a week for the French. With a World Cup semi-final with their next door neighbours on Tuesday 10th July, and Bastille Day on Saturday 14 July, it’s a week wthat swings from “Liberté, égalité, fraternité” to “Vive le VAR!”.

At Matters Musical we have some fabulous French musicians and acts ready to add Gallic flavour to any French-themed or inspired event.

Flossie is a French born singer-guitarist with a rich, soulful sound that combines a pincée of Edith Piaf with a soupçon of Karen Carpenter. Flossie sings and plays a wide variety of songs in French, English, Spanish and Portuguese, and her lovely sense of humour makes her ideal for intimate gathering and family occasions.

Club Tabou reflect the diversity of French music and the many influences that shape it to this day. This talented guitar,sax and double bass group recreate the authentic sound that was epitomised in the 1930s and 40s by Django Reinhardt and the Quintet du Hot Club de France. Sassy, sophisticated and trés jollie, check out their sound files on their Profile page, including the upbeat “Nuit de St Germain Des Pres” and the laid-back “Melodie Au Crepescule.”

Caroline has been described as as the Marlene Dietrich of the 21st Century. She brings exceptional style and class to any event, as she croons, purrs and sings in perfect English, French and German. Her Piaf tribute show toured nine countries, from Italy to China, Taiwan and the USA, and her show “La Dietrich” sold out for two weeks in Sydney, Australia. Needless to say, her demo tracks are a must-listen!

The 1940s were the golden era for chanson, jazz and swing in Paris. Fleur de Paris are a talented quintet who dress, sound and play the part to perfection with that instantly recognisable French combo of accordion, singer, violin, guitar and bass. Perfect smooth background music or as your main evening entertainment, their sets are carefully devised to create the perfect atmosphere.

Alan is an exceptional accordion player which is why you’ll see his face in several different band profile pictures on our website. His violin and accordion duo Café du Monde play music from around the world, including la belle France.

The distinctive sound of the piano accordion is at the heart of so many French favourites. Female duo Paris Moon combine the sounds of this ultimate acoustic instrument with the gentle bear of a double bass, playing evocative French melodies that appeal to all ages.

Once more unto the breach…

For all your French musical entertainment requirements, call us here at Matters Musical. We’ll be happy to help you. Of course, if France reach the football finals it’ll be on Sunday – and potentially the French will be playing England. Just don’t mention tennis balls or Agincourt…