Summer weddings: avoid the popular days and save 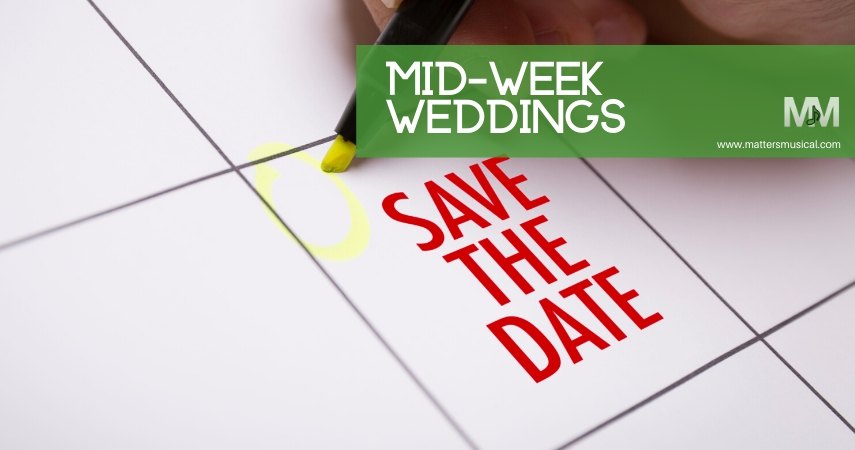 When planning your wedding, there’s one crucial decision you need to take early on – the date.

According to a study by jewellery firm Beaverbrooks, the most popular day to tie the knot in the UK is 30th August. This is hardly surprising given that it’s part of the August Bank Holiday, so more guests should be able to attend. Of course, that also makes it a very popular weekend. Most venues will probably be already booked for that date, as will the most popular wedding entertainment including cover bands and party bands.

What are the other wedding days to avoid?

You might consider getting married later in September instead. However, according to Stastica,  that’s no good either. Whilst August is the peak month with 17% of all weddings, July and September are not far behind. Better to wait until October, where the wedding rate fell to just 8% in 2018.

Needless to say, there are a lot of couples out there potentially thinking the same thing. According to the Office for National Statistics, there were:

That’s a lot of couples competing for just 52 Saturdays in 2020!

According to Sandals Resorts, couples are choosing 20/02/2020 for one simple reason – it is a truly memorable wedding anniversary date that their spouse should NEVER forget! (Hopefully…)

Having your wedding during the week means increased availability for everything from caterers to wedding DJs. A wedding venue that’s booked solid for every summer and early autumn Saturday might well have excellent availability on a weekday – and potentially be cheaper too.

The same applies to your wedding entertainment. If you want one of the top UK party bands, chances are they are already booked for those most popular Saturdays. However, they will have better availability during the week, and may charge less as a result to fill their diary. It’s always worth asking, so make sure you make add the various acts you’d like to your shortlist on our website, and send in your request well in advance.

The most expensive time of year to get married

Prices for wedding venues tend to rise sharply after Easter, peaking during the summer months before dropping off again at the end of October. So, getting married in the summer in the UK is more expensive – no surprise there. But exactly how expensive?

According to Hitched magazine’s, survey of almost 3000 couples, the average cost of a wedding in 2019 was just under £32,000, up a staggering £5k from 2017. The top expense was the venue, at almost £5.5k, with wedding entertainment coming in almost last at a very reasonable £1k. Many brides now choose their wedding date according to how much they need to pay. As one bride interviewed by You and Your Wedding said:

“We knew we needed around 18 months to save and pay for what we wanted and that led us to December (the following year).”

The most-cost effective month to get married is…

March! According to Statista, only 4% of weddings happen in March (4). Which is a shame because it’s such a lovely time of year in the UK, with spring flowers emerging and the weather is warming up. Yes, you might have a few guests who have given up things for Lent, but the majority will be more than happy to toast you with champers and tuck into the wedding cake! Easter is later in 2020, with Easter Sunday on April 12th, so guests won’t be heading off on holiday yet either.

Work can really get in the way of a good wedding! Getting married during the week potentially reduces the number of guests who might be able to attend due to work commitments or lack of holiday. The trick here is to set the date good and early, and send out the invites pronto, so everyone can book time off work and make travel arrangements well in advance. Fridays are always good as people only have to take one day off, and have the weekend to recover a bit!

Time off school for family weddings

Parents will not be allowed to take children out of school for a wedding without the express permission of the school head and in alignment with any Absence From School For Exceptional Circumstances Policy. Most heads will consider the wedding of a close family member as an Exceptional Circumstance, but not necessarily a friend’s wedding. This is a serious consideration for parents of school age kids, as the East Riding authority website explains:

“Any unauthorised absence will be recorded on your child’s attendance records. This may result in legal proceedings against you, either through a Penalty Notice or the Magistrates’ Court.”

Parents will need to provide written evidence of the occasion. So make sure you send the official invites out good and early, and write the name of every school age child on their invitation. The times children are least likely to be granted Exceptional Circumstances include the first half term of any academic year – which rules out those September and early October dates. If lots of your friends and family have school-age children, you might be better to stick to school holidays instead, include half terms. Or at least give them plenty of notice so they have time to arrange a sleepover with a friend, grandparents to take care of the school run, etc.

Find out when friends are getting married

OK, it’s time to compare diaries. The last thing any bride wants is for their big day to clash with another wedding, forcing friends to choose which to attend. That’s another reason for opting for a weekday wedding – friend availability!

Frank is the head honcho, the top man, the wedding supremo here at Matters Musical. He’s organised more awesome wedding entertainment than most people have had hot canapés. Call him to discuss your special day and how to fill it with wonderful musical moments from first light to late night farewells.