The music for a certain Royal wedding 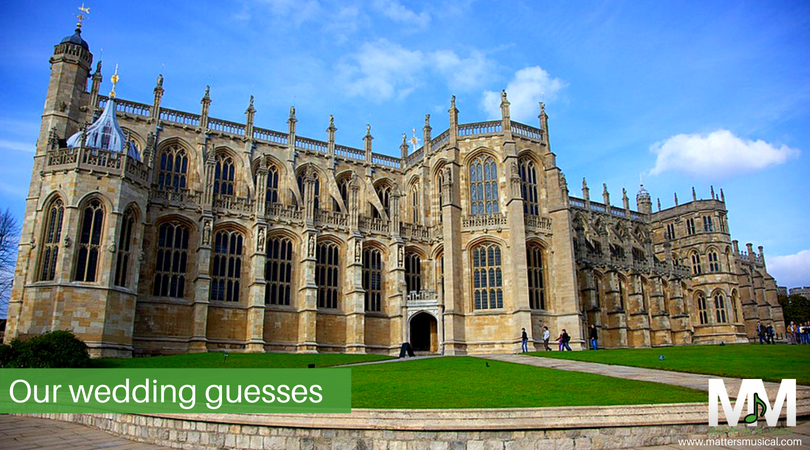 We’ll be honest, when we planned this blog, we assumed we’d know the music for the wedding of Prince Harry and Meghan Markle by now.

No such luck. However, the list of musicians booked to perform has been announced, and gives us some interesting musical clues…

“Prince Harry and Ms. Markle have taken a great deal of interest and care in choosing the music for their Service, which will include a number of well-known hymns and choral works.”

So, what would the booked musicians be most likely to perform? Here’s our best guesses!

The Choir of St George’s Chapel

For the choral works and to lead the hymns, the couple have enlisted the talents of the chapel choir. The Choir of St George’s Chapel comprises of up to 23 boy choristers from St George’s School, and twelve Lay Clerks. The Choir was founded in 1348 and sings music from all periods, so their solo items could be almost anything from medieval to modern. If we had to stick our necks out and predict some front-runners for the hymns, we’d probably go for:

and because of the regimental connections (see below), the Choir singing:

Karen Gibson and The Kingdom Choir

As one of the UK’s foremost gospel choirs, The Kingdom Choir will bring the energy, passion, delicious harmonies, and sheer enjoyment of glorious gospel to St George’s. We can’t wait to hear what they’ll perform, but we’d take a wild guess it might include one or two of these:

Prince Harry served with the Blues and Royals, one of just two regiments in the Household Division. The Blues and Royals regimental band is famous for its military trumpet calls performed on the valveless cavalry trumpet. So it’s hardly surprising to find one of the UK’s best Barque trumpet players (the splendidly named David Blackadder) invited to perform at the wedding.

There’s also a strong history of marching music composed for the band. The regiment’s “March of the Royal Horse Guards” was written by Johann Strauss, and the slow march “The Dragoons and Tangier” is an arrangement of Bach’s choral work “Jesu, Joy of Man’s Desiring”. More up to date, the band often perform the theme “Gabriel’s Oboe” from the film “The Mission” and composed by Ennio Morricone.

So, we’d guess at a couple trumpet-led items, perhaps:

Given the booking of The Orchestra (made up of musicians from the BBC National Orchestra of Wales, the English Chamber Orchestra and the Philharmonia) and a Welsh soprano, maybe also:

Sheku, winner of BBC Young Musician 2016, is already a celebrated soloist. We have no idea of what he might play, although given the rather sombre mood of many famous cello items such as Elgar’s Cello Concerto, and the intensity of of Shostakovich’s Cello Concerto, he might plump for a more popular item such as:

Either way, we suspect the waiting list for the school cello teacher next term might be longer after his appearance.

Ms Thomas is known as a Baroque specialist, starting her career as a member of The Sixteen. She’s also premiered works by Tavener, Jenkins and Rutter, and other contemporary composers. We reckon she’s a natural choice as the soloist for:

as previously suggested. However, given that this is the wedding of His Royal Highness Prince Henry of Wales, there should be a Welsh tune in the mix somewhere! Perhaps:

“I don’t ask for a life of luxury, the world’s gold or its fine pearls. I ask for a happy heart, an honest heart, a pure heart.”

Of course, we won’t know exactly what will be sung and performed until the full Order of Service is published on the Royal.org website on Saturday morning, “So members of the public can follow the service at home”, says the Kensington Palace press release. Until then, our guess is as good as yours!

Live music at your wedding

If you have a wedding planned this year, and want live music performed at your ceremony, just call us. We’ll be happy to help with suggestions from the traditional to the unique, to make your wedding day fit for a future king and queen (or two kings, or two queens, you get the idea).