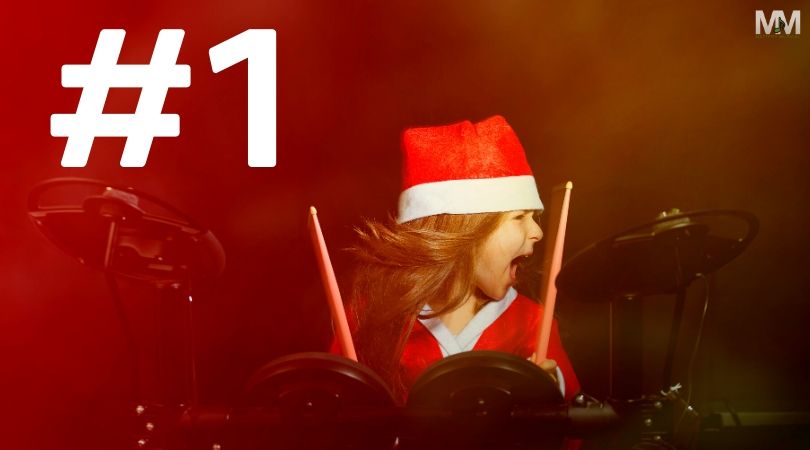 There is a slim chance that, this year, a couple and their two young boys might just join one of the most exclusive clubs in music. Only two groups have ever had consecutive Christmas Number 1 singles – the Beatles and the Spice Girls.

They might soon by joined by Mark Hoyle, aka LadBaby, along with his wife Roxanne. Last year in 2018, they rewrote the lyrics to the 1980s hit “We Built This City” as an ode to sausage rolls. It went to Number 1, raising fund for the food bank charity The Trussel Trust.

Now they are back with another ode to their favourite savoury snack, “I Love Sausage Rolls”  a rewrite of the Joan Jett classic “I Love Rock ‘n’ Roll”. Again raising funds for The Trussel Trust, LadBaby are currently in the top spot, beating Stormzy’s “Own It” featuring Ed Sheeran and Burna Boy into second place.

It looks like nostalgia is having a comeback too. “Last Christmas” by Wham! has been pushed up the charts to the number 3 slot by fans determined that the UK’s best-selling Number 2 single of all time claims the top spot.

Mariah Carey’s iconic “All I Want For Christmas Is You” is currently at number 6, a full 25 years since its first release. Carey’s Christmas classic wasn’t eligible for the top single slot when first released as it was on an EP (remember those?).

The race for the top slot will continue right up until 11.59pm on Thursday 19 December. Then, as the Official Charts website reminds us:

“The Top 40 will be counted down exclusively on BBC Radio 1’s ‘The Official Chart with Scott Mills’ from 4pm Friday 20 December, crowning the winner of the Official Christmas Number 1 2019.”

Radio – how retro! And, how very fitting for a chart that combines star names past and present with two people resplendent in their sausage roll tracksuits taking a traditional British pork product to a new height.

Actually, the sausage roll probably originated in France in the early 19th century. It became popular during the Napoleonic Wars, and establishing itself as an English food item. If you’re in any doubt just how popular sausage rolls are, you only have to look at high street bakery chain Greggs for the answer. According to an ITV news report back in March;

“Greggs’ sales in 2018 have topped £1 billion for the first time, while the launch of its vegan sausage roll has helped sales surge in 2019.”

When your Christmas party cover band belt out the latest Christmas hit or an ‘oldie but goodie’ like Slade’s “Merry Christmas Everybody”, the song will still be in copyright. The authors of the original song will receive royalties through the PRS. Established venues presenting live music will have a license, known as TheMusicLicense and will send a return form detailing each item in a band’s live set. As the recently combined PPL and PRS website says:

“This ensures that the people who create music are fairly rewarded for their talent and work.”

If you want to cover a song and sell it, even for charity, that’s a different ballgame. First, you need permission to record the song and change the lyrics – not every artist may want their song associated with sausage rolls, for example. You can look up who owns a song (the interested parties) in the PRS database .

To sell a digital or physical audio recording, you need to get a mechanical license from the PRS (Performing Rights Society, usually an AP1 or AP2 (6). If you’re just selling your own CDs or downloads, the Limited Manufacture license may be more suitable.

Christmas bands – all booked up?

To be honest, most of our party bands are booked months in advance and have a full diary over the holidays – but not for all day, every day. The same applies to all our ands, whether swing, rock, soul, funk, whatever. So if you want to jazz up your brunch or spruce up your second sitting with soul, call us. Our extensive roster of artists are based all over the UK, so whilst a London-based band might not have the time to travel to Sheffield due to other commitments, a Leeds-based band may be more than happy to pop down the M1 for the afternoon.

Whatever your music requirements this Christmas holiday period, call us. We’re also taking booking for summer weddings 2020, with some bands already sold out for the popular weekends. As the saying goes, book now to avoid disappointment….